As a kid of the 70s’s I’ve usually been up on things early on, weather it was DJ’ing and having my own equipment or being into technology and owning my first computer, the Commodore 64 and surfing the phone lines on Bulletin Board Systems (pre Internet) and connecting with people across the globe since 1983.  I’ve always been a “gamer” way before that term existed much later on and spent plenty of hours locked behind a screen loading games via floppy disk and sometimes cassette.  One major game companies that I’ve always been a fan of was EPYX who released a slew of at that time advanced games and concepts to the home computer market.  EPYX had an eye for knowing what was cool with the youth and how to tap into that market which they did very well. Weather it was the influences from the West Coast skateboarding, BMX and surfing scenes via their “California Games” or coming from the East Coast perspective with “Breakdance” which was obviously inspired by the new trend that was hitting the streets as well as movies like Flashdance and Beat Street. 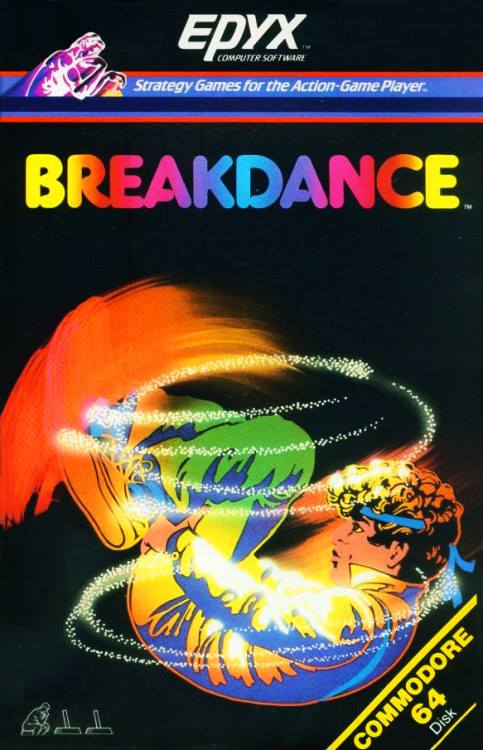 Making its video game debut in 1984, the concept was simple, the computer would perform 5 moves which you would then have to remember and do exactly the same, similar to Simon.  An additional move would then be added to each round to make things even more difficult. There are 5 challenges in total including “Hot Feet Dance Contest”, “Battle The Rocket Crew” where you had to battle and duplicate each of the gang members moves before they push you into the river, “Perfections Dance Puzzle”, “Choreograph Your Own Dance” and “Grand Loop” where you played each of the challenges for a chance to make it in the Break Dance Hall of Fame.

EPYX Breakdance was the first of it’s kind, created when things were fun, free from politics of the scene and definitely before dancers started crying about corporate companies “exploiting the dance” which is why it sold tons of copies to not only dancers but to people who loved gaming in general and sold more copies than the 2006 Sony video game, Bboy.  Of course with any youth driven subculture there will be the purists who are anti corporate, but look at where both the skate and BMX scenes are today and how icons such as Steve Caballaro embraces the classic Atari 720 Skate or Die arcade game or Tony Hawk’s Pro Skater which series lasted from 1999 to 2015.