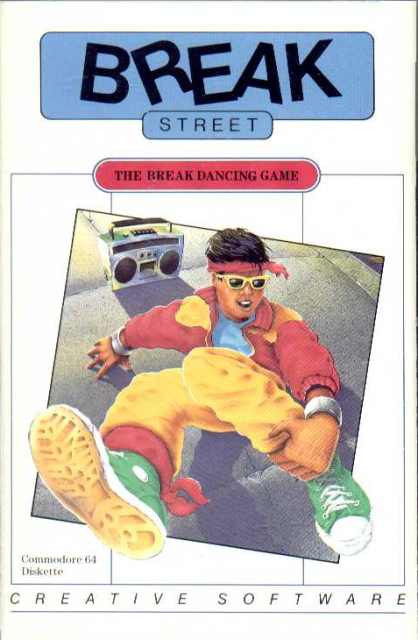 A few weeks ago we took a look back at the 1984 Epyx video game Break Dance for the Commodore 64 which was the first of it’s kind.  This week go a little deeper into a lesser known game called Break Street which was produced by Creative Software and released later that same year and based on the same street dance.  One notable that should be mentioned is that the game feature a Seattle, WA crew by the name of De Roxy Crew which would mark the first time a breaking crew was featured in a video game.

First off you choose a dancer to play out of the four possible options, including the two man team of “Double Trouble”. Warm up mode allows you to test various dance moves. Moves are triggered by joystick directions and use of the fire button. They range from simple moves such as the moonwalk to more complex maneuvers such as the head spin. There is a decent variety of moves available thanks to the same joystick action doing different moves depending on whether you are standing or doing floor moves. The main game portion gives you a time limit in which to perform your moves and rack up points. An energy bar on the left side of the screen diminishes as you do the more complicated moves. In order to regain some energy you can do a simple move such as uprock or the moon walk. Complex floor moves drain energy quickly. If you are close to running out of energy your character will turn red, warning you to shift to something less strenuous. If the energy bar is completely drained, your performance will be over and your dancer noted as being “beached out”. It is also possible to fail at a hard move, causing your character to sit and cry on the ground, ending your round.