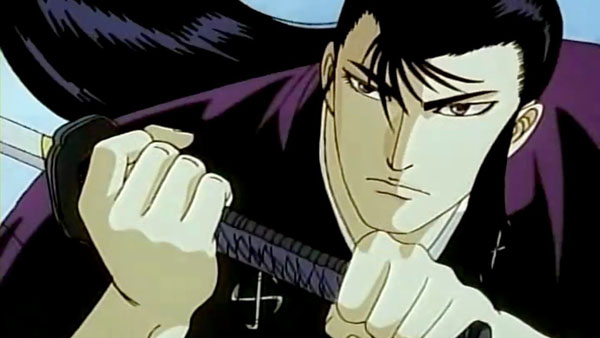 Way of The Samurai – Sword For Truth

As we continue on with our Way of The Samurai Wednesday, Nostalgia King takes a look back at Sword For Truth, one of our favorites released back in 1990 then in 1998 dubbed and released on VHS here in the states under the Manga Video banner. Following on the heels of Ninja Scroll which was released on VHS only 3 years earlier, Sword For Truth didn’t make the same impact and rightly so, it’s tough to be the 10/10 predecessor but still a very worthy follow up and watch. Fans of the genre either like it or not yet there’s still a sense of nostalgia for me when watching so decide for yourself.

Sword for Truth (修羅之介斬魔剣死鎌紋の男? Shuranosuke Zanmaken-shi kama mon no otoko, lit. “Shuranosuke the Demon: Man of the Death Scythes Crest”) is a 1990 OVA chanbara film directed by an uncredited Osamu Dezaki, who was credited as storyboard artist under the alias “Tsutomu Dezaki”. The film is based on a series of novels by Takeshi Narumi.

Within feudal Japan and amidst the absolute rule of the Shogun, one man, Shuranosuke Sakaki the master swordsman, furiously protected his independence. Bearing the legendary blade Onimaru he walks alone and unafraid, cutting a swathe through those who stand in his way. Hired by the Tokugawa Shogunate to rescue Princess Mayu from the clutches of a group of bandit ninjas – the Seki Ninja, Shuranosuke must rely upon all his skills as well as the aid of the beautiful ninja thief Orin to stand against the summoned undead spirits of Hell barring his way.