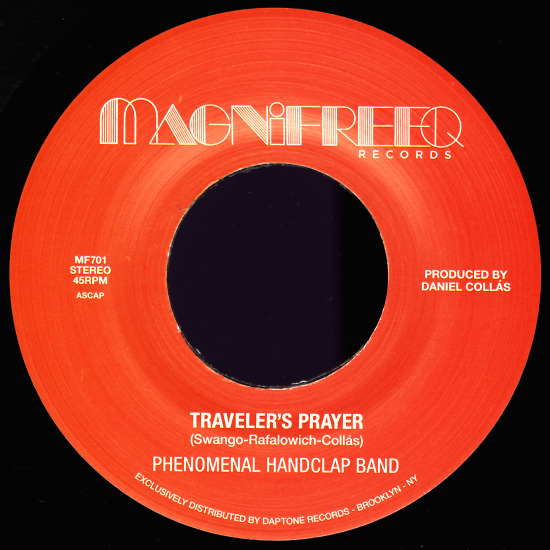 “Incredible new works from Brooklyn’s own Phenomenal Handclap Band coming through with beautiful and refreshing new tracks featured on their new imprint, Magnifreeq. Producer and founding member Daniel Collás has teamed up with singer and multi-instrumentalist Juliet Swango for this release, an exciting, beat-heavy blend of psych, northern soul, and krautrock, recalling a time when such disparate sounds were mixed together by pioneering DJs at the dawn of New York’s nascent hip hop and underground disco movements.”

The group brings nice 80s elements into their music, while still keeping things nice and warm overall! “Traveler’s Prayer” almost feels like soulful fusion from The Crusaders generation – with a great female singer who comes into the mix once the instrumentation gets going – and breaks that are peppered with this thinner keyboard part that makes for a mighty nice contrast! “Stepped Into The Light” is more of a full-on track – almost fusion overall, with keyboard lines that soar up and down – until the singer comes into the mix, and does her thing in an equally soaring way!” – DG