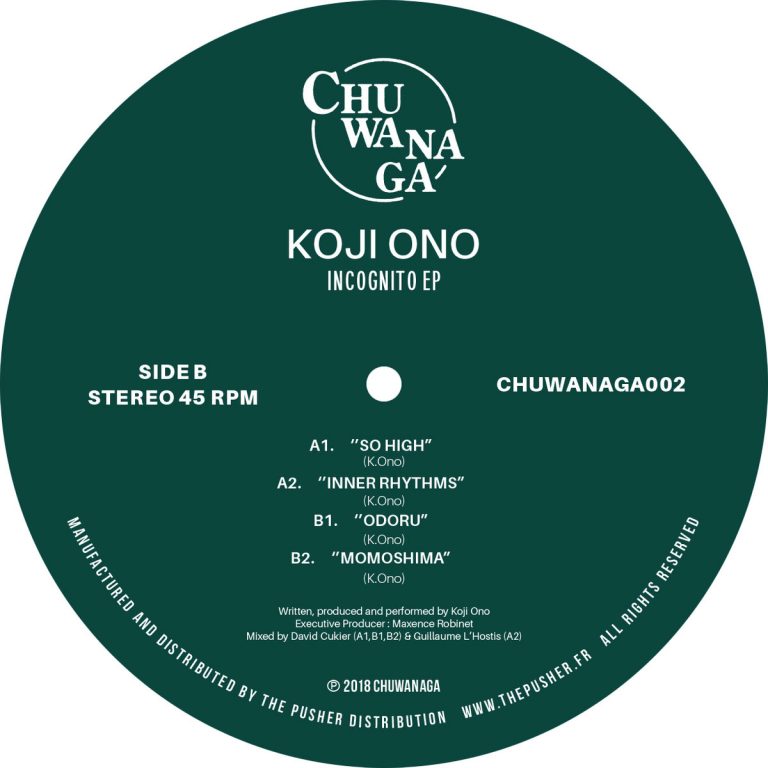 Inspiration is the father of all creations and when perfectly executed, a masterpiece will soon follow which is what you’ll find on the new Koji Ono “Incognito” EP.

“Sparkling synthesizers, hustling guitars and house-tempo jazz-funk grooves of “So High”, the wiggly Clavinet lines, whistling melodies and rubbery bass of “Inner Rhythms” and the luscious, misty-eyed warmth of ear-pleasing mid-tempo instrumental jam “Momoshima”. All are exquisite examples of revivalist cuts that boast more than enough freshness and impeccable instrumentation to bear comparison to the records that inspired them.”

“Sometimes there’s a huge talent out there and you desperately want the whole universe to discover it. That’s pretty much the story of parisian label Chuwanaga with young french artist Koji Ono, composer and producer of these four precisely crafted gems, recording everything by himself. Brilliantly mixed by Greita from Disques Flegon, his first EP Incognito is the product of a lot of influences, from Metro Area vibes to the original Britfunk sound. With an inner sense of elegance in the arrangements – something we may link to his japanese heritage ? – the whole EP brings musicality back on the dancefloor. We believe this could be the beginning of a great story for this talented musician, Koji Ono emerging from the incognito shadow to the whole light of the world.” – Juno Records