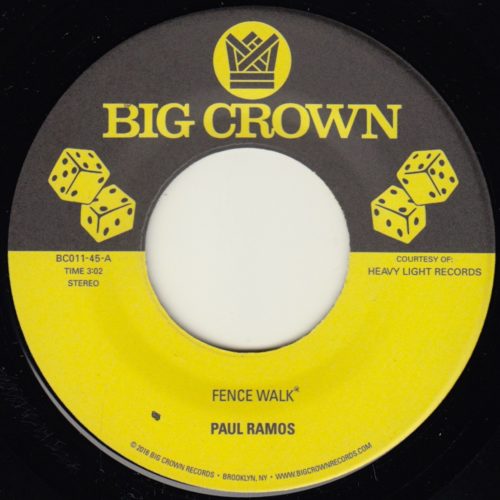 One of my favorite funky 45’s gets a nice reintroduction and backed with another jazzy cut that should be in every record box courtesy of Big Crown Records. For their latest release, they’ve gone the extra mile to bring you one hell of a cover version of the Mandrill classic, “Fence Walk” done here by Paul Ramous.  Although covered a few times, I’ve never heard a bad version of it and this version does it more than justice.

The flip side features“Funky Resurgence” by vibes player/bandleader Ulysses Crockett who was a stalwart on the Bay Area scene of the 1960’s first with his Latin Jazz group Afro Blue Persuasion and later Ulysses Crockett Magic. He also played in The Skins w/ the legendary Bill Graham. “Funky Resurgence” was one of several compositions he wrote for the 1971 play “Resurgence.” During this period, Ulysses was also going through law school and he remains a legal voice, writer and activist in the Bay Area.

Two cuts that don’t get nearly as much play out as they should but on a split 7″, theres no reason not to make sure they’re tucked away in your box when sorting selections for upcoming gigs.