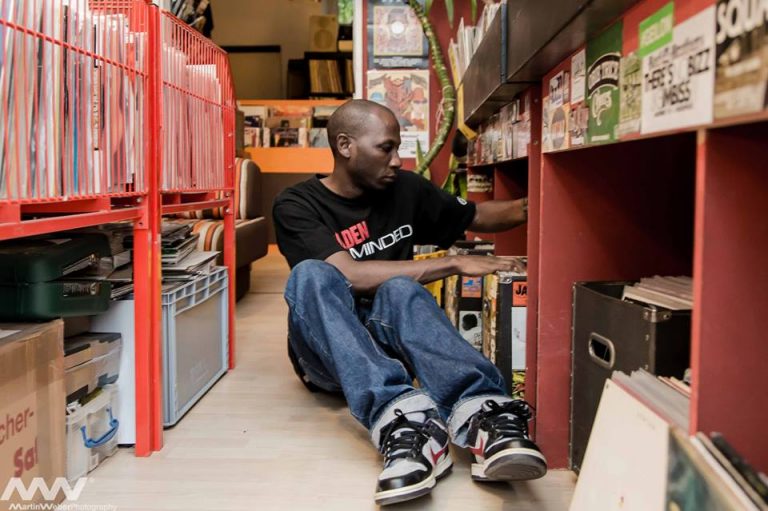 I met Skeme Richards in 2004 at a Philly loft party in a rugged pre gentrified area of the city while he was playing an all 45 set and instantly became a fan of not only his musical selection but of the man himself. He was interesting in every way, from the types of music he played and how he played them, to the places he traveled to entertaining audiences on the dance floor. Whenever I had a break in my work schedule I would do my best to find out locally where he would be playing and be front and center in attendance. From his all 45 nights and James Brown tribute parties in New York to his funk & soul shindigs here in the City of Brotherly Love, it was always an experience. As a fan of his parties, I am equally a fan of his mixes and particularly his cassettes that he’s released over the last few years that broaden my palate for sounds and flavors that are foreign to my ears but soothing at the same time. So with his upcoming Shifting Gears II soon to be released, I wanted to get inside of his head and find out a few things that I’m sure others are equally interested in knowing.

-Mossimo Chao
How did the Shifting Gears cassette series come about?

I’ve always been a music lover, buyer of records and enjoy being introduced to new music and in return, presenting it to others. As a producer it was always about finding something rare but dope and at the same time to flip it which I learned early on by my OG, DJ Groove and is also the same route in DJing that some of the early digging kings that were putting sample tapes together took. Guys like Soulman, The Conmen, DJ Muro and others were doing in the 90s. For the most part here in the states, doing these types of tapes have become non existent but there are still guys in Europe and Asia that are still digging and putting mixes together. We’re living in an era where so many people floss records on IG yet very few are making mixes or playing that music for people. I felt like tradition should be carried on and who better to do it than the Nostalgia King so in 2015 I dropped the first volume which was all samples and breaks on 45.

I’m a record collector, I buy and tour with both 45’s and 12” but the 45 thing was trend heavy with so many people jumping on in the last 5 years or so that it just seemed that it made sense to do an all 45 mix especially because so much of the hype was on buying common records just because it was on 45. It was a way to tell people to dig deeper than just buying the same records on 45 that you already have on 12”. With the new tape, I did both formats because there’s dope records from across the globe that I wanted to use. From Korea to Russia, Detroit to Estonia, there’s way too many good records out there that needs to be heard.

You’ve worked with Record Breakin’ on most of your cassette releases. How is it working with a label when you’re presenting something artistic that you’ve created?

Being able to work with a local Philly label is great especially because of the common theme of us both being independent, heading in the same direction and no politics involved. I think we’ve seen eye to eye 100% of the time on these projects because we both believe in each others brands and thats whats important.

You seem to have a reoccurring theme of “dig deeper” weather it’s on your tapes, through the reviews that you do on the Nostalgia King site or with some of you other rare collectibles that you collect and showcase. Why is digging deeper important?

If you’re a lover or collector of something then you always want to surround yourself with those things but you also want your collection to standout or be different than others collections. That could be with anything that you’re into, from collecting art to vintage furniture, it’s all about those pieces that speak to you and no two collections should be alike. In the musical sense, there are so many great artists, bands and labels putting out music thats pretty much going under the radar because they are independent and there is very little media coverage out there exposing them. It’s not like years ago when music journalists were up on new bands and hipping you, now you have to do the work yourself or read Nostalgia King for the scoops. The world would be boring if we all listened to the same playlists.

What does artistic freedom mean to you?

Being independent or having control in a controlled situation and I have both of those things. I have the ability to create as I see fit and when I feel like it and can release music when it feels right on my own. Having control in a controlled situation is having a label or financial backer trusting what you do and saying “ok when you’re ready let’s make it happen, send me the master, I’ll send it to get pressed”. No stress involved, just a mutual understanding of putting out something dope.

Be sure to catch Skeme Richards’ new Shifting Gears II mixtape which is available for pre order in the Nostalgia King online store https://nostalgiaking.com/shop/ or over at https://recordbreakin.bandcamp.com and I highly recommended you going back and finding volume 1, his New Library Sounds and his No Requests (released on Funk Night Records).