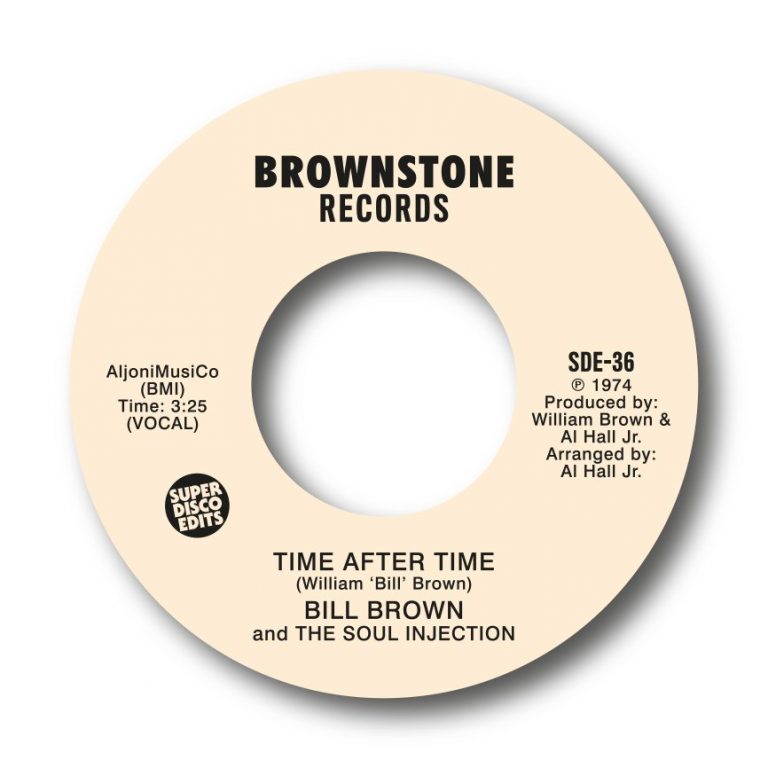 Sometimes there are reviews that slip through the cracks that I should’ve written up but for some reason or another never got around to it but timeless music never gets old which is the case with this next release on the Super Disco Edits label.   Once again unearthing a previously unreleased (sort of) track from Bill Brown & The Soul Injection with “Time After Time” originally recorded in 1974 on the Brownstone label.

The recording industry has always had it’s up’s, down’s and shady business but as the story so goes, Bill Brown and Al Hall Jr met around 1971 while living in the same apartment building in South Central L.A  (also in the same building was Doug Carn and Brownstone singer Billy Wilson). The studio sessions where these recordings come from were done at Paramount studios in Hollywood where Al Hall Jr was working for producer Art Smith of A&C Music. With the main distributor for A&C being Accent records, The Soul Injections very first single “Stay off the moon” was released via Accent, as was Bill Browns “Bip Bam”.  The group wasn’t pleased with how Accent handled their releases so Bill took it upon himself to set up his own label called Brownstone records. Many musicians were called in for studio sessions during the time included and included the likes of Doug Carn (organ), Kirk Lightsey (keyboards), Mel Bolton (guitars), Mel Lee (drums), Al Hall Jr (Trombone) and Willaim ‘Bill’Henderson (strings). The label was met with some confrontation from other Hollywood labels and many of the Brownstone releases were blackballed and told not to be picked up by the shops by Mafia ran labels. Later around 1975 Brownstone released a track by Everyday people feat Alexis “World Full of People”, now a now cult soul 45 and one high on many collectors list.

Super disco edits once again have gone the extra mile and unearthed the original tapes with the very first incarnation of that song and music featuring different lyrical content and sung by Bill Brown. What makes this 7″ even more special is that you get the instrumental on the flip which is always a win win. So back to what made me remember why I needed to review this release is that I’m here in Japan and it’s been getting heavy spins by DJ’s here which is a very good sign.