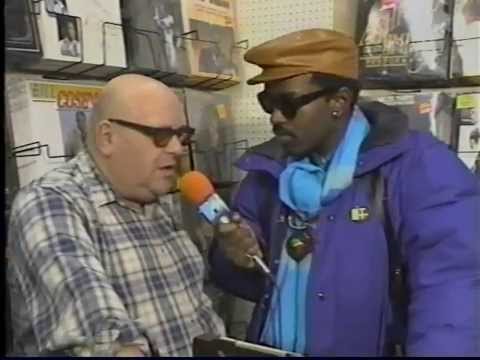 A few weeks back the homie Forrest Getemgump were discussing the history of digging and those who were actually involved and are legendary yet aren’t mentioned nearly enough. Many of the people who were there at the beginning of any type of movement who go unmentioned often times have passed away before there was any type of mainstream attention only for others to come along and “take” the spotlight. Two names who we discussed were both legendary figures in the record world, Breakbeat Lenny (creator of the Octopus Breaks which eventually became Ultimate Breaks & Beats) who we will cover in a later series and Stanley Platzer of Music Factory. While discussing both of these gentlemen, we started reviewing rare uncut VHS footage from when Stanley Platzer made an appearance on Yo! MTV Raps hosted by Fab 5 Freddy. In discussing music, Stanley who had crazy record knowledge talked about a lot of records but also spoke highly of Breakbeat Lenny and his infamous serious breaking down so much important history about Lenny and UBB that I don’t think has ever really been discussed in-depth.

After starting a thread on Facebook, quite a few people chimed in to add their experiences, memories or simple legendary tales of Stan and why he was so loved so we decided to add some of those excerpts here to continue the history of Stan The Man and in a future story, Breakbeat Lenny.

T-Ray – “I’ll never forget talking with Stan about breaks. He showed me his big spiral bound notebook full of titles! He would write down every break people were looking for. One of the first times I went into Music Factory, he was putting me up on a break and, while trying to convince me to buy it, said ” Biz Markie was just in here 5 minutes ago and bought a copy!” That’s one reason why I have always respected Biz as a beat digger. I also got my Octopus breaks from there.

DJ Cash Money – “Me & Biz Markie used to be around Breakbeat Lenny getting records all the time back in the day. Before any internet was created we had personal relationships with every record collector everywhere. We would be at their houses getting the rarest records before these guys would go set up at the record shows”

Aaron Fuchs – “The wall of records behind Stanley and Fred tell a tale just as important as breaks albums do of that store as a ground zero communications medium (and natch it was stanleys turf); around 1984 when the West Coast rappers started coming to the new music seminar they were buying records off that wall like they were catching money falling from the sky and very quickly and not as a coincidence the big gap between the sounds of East Coast and West Coast rap was closed. In fact for a couple of years there was a photo above the wall of Stan and Eazy-E posing together.”

DJ Lighnin Lance – “I use to mix at Lennys house back in 78 n 79  and I remember him coming to the T-Connection in 79 n 80.  He got the name of alot of breaks Form Afrika Bambataa and he had a son that they used to call Lil James Brown, he was a break dancer. Big shout out to the Leland house crew-R.i.p Chris Hicks-R.i.p Mr Lenny Breakbeats Roberts who treated me real nice”