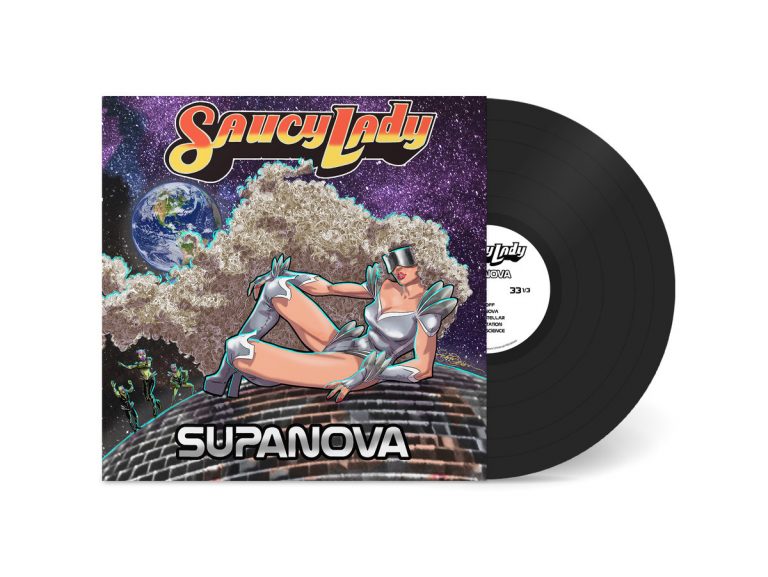 An Intergalactic Conversation With Saucy Lady

In the world of music and entertainment, there are few artists that I follow their every movement to keep up on whats going on in their career in anticipation of something phenomenal that would soon hit the airwaves and discotheques. One of those artists who is talented in multiple areas including DJing, producing and singing is the very energetic and outgoing Saucy Lady who happens to have a new album that recently dropped. “Supanova” is an intergalactic journey through time and space which covers a spectrum of genres that communicate with humans and aliens alike.  What happens next is a conversation  that took place on the flight deck before Saucy Lady blasted off to another galaxy for a string of tour dates

Over the last few years, we’ve seen both your sound and look sort of evolve. Not necessarily a change or a drastic depart from what once was but more so of a concentrated focus yet still experimental in a way. It’s been 8 years since your debut album with a crates worth of singles in between, what are the similarities and differences in your growth as a person that has contributed to your artistry between then and now?

Although musical interests and how we live our lives evolve over time naturally, fundamentally I don’t think my sound has changed drastically. With songs like “Touch It” or “Boy Toy”, the lyrics I used to write early on had stronger focus on my feminine sexual assertiveness. I also used to party heavily back then so many of the songs were about those experiences going out and having a good time. There were some songs that had introspective, conscious content too but with my latest album “Supanova”, I wanted to take a step back and reassess where our lives all fit in the big picture.

Since my music can now reach a lot more people all over the globe I realized I’ve been given an important opportunity to share more meaningful messages through lyrics. Music is so powerful that these messages in lyrics can make an impact in people’s way of thinking and even behavior.

In this album, I wrote about how we act as human beings when viewed by an outsider with “Universal Vision”. People look for bigger and better fortune as we live in a capitalist society yet we don’t seem to be aware of how that impacts the universe as a whole.

With “Alien Nation” I highlight how we can sometimes be prejudiced against beings that are different from us. We fear what we don’t know, but we should face our fears and make an effort to get to know each other better for the greater good of the planet.

Your upcoming album “Supanova” is unlike anything that you’ve previously done, yet as someone who follows your career closely, it’s exactly what I would expect from you at this point combining styles and sounds of Jazz-funk, heavy breaks and stellar synths. You’ve become a very intergalactic personality amongst the stars and Supanova is sort of a cinematic Sci-Fi composition and guide through the galaxy. What was the thought process behind the idea and how long was the recording process from start to finish?

There is still so much mystery around our galaxies that this theme around space naturally sparks our creative mind. I decided to use this theme so I could get extra experimental with my sound. I was inspired by Sun Ra since I was a child and this album allowed me to pull out my inner Sun Ra Arkestra vibes with certain moments in the album. I also wanted us to forget about time and create music that is timeless. So in the introduction of the album I tell the listeners to “forget about time”, and in the last track I used no time signature and improvised it completely in rubato. Although there were a few other musical projects that I had worked on in parallel with this album, it did take about 2 earth years to complete it from start to finish.

In addition to your continued working relationship with multi-instrumentalist/producer Yuki “U-KEY” Kanesaka aka monolog on this album, there is a nice lineup of musicians who were involved locally from Boston including Pharoah Sander’s son Tomoki Sanders on tenor sax, guitarist Jeffrey Lockhart (Prelude Record’s Hi Gloss) and of course the hardest working drummer around, J-Zone (of The Du-Rites). With so much talent in one room, was there freedom of creative flow and experimenting or did you already have a vision in your mind?

We definitely had a clear vision in mind when we asked players to record with us. With J-Zone we gave him the tempo we wanted and the general style we were looking for, and we left the rest up to him. With the solo instrumentalists we had them improvise over some constraints like length of solo expected, and had them play over chords we already constructed. For certain horn riffs like in “Supanova” we already had those melodies created for them to play. We are always open to suggestions and we certainly took some in. In general there was a lot of creative freedom for them.

Vocally, you’ve really stretched out on this album covering a wide range of varying styles with “Calling Jupiter” as one that stands out. It’s a very bubbly Jazz-funk tune with you doing scatting overtop of it and doing it in such a way that it doesn’t overpower the song while letting the music breathe. How did the concept for it come about?

Like many people, I’ve always listened to a lot of Bebop on Blue Note. I happened to be listening to Lee Morgan’s “Cornbread” and had the inspiration to form a song arrangement like one would do in jazz. Play the main theme in unison at the start of the tune, followed by having each player do a solo improv, then jam out together, and end it with the main theme in unison to reinforce that melody. Yuki played the drums on it at a different studio than his, but in general since the it was a simple form of arrangement it was an easy track to record. I also find it to be one of the most fun songs to play live because it’s an improvisational jam. As for my vocals, it’s an instrument after all so I did some scatting. Whenever I do I try to mentally picture myself improvising as if I’m Freddie Hubbard but a vocalist, and it helps me get a confident sound.

I’ve always been a stickler for albums with themes and not just a bunch of songs stuck together for the sake of calling it an album. After the listener is finished, what type of feeling or emotion are you hoping that they take away from the album?

I want people to become more aware that they are one with the universe, inter-connected, and that their actions have a lasting impact on the long-term health of our planets and our galaxies. I want everyone to take a step back from their everyday hustle, and realize that we are all equal, that there is not one being better or worse than the other. I hope we can feel stronger compassion for one another after listening to the album.

You stay pretty busy on the scene, weather it’s out DJ’ing, writing and recording in the studio or maximizing your social media presence with amazing photos. How do you prioritize and balance your work schedule with the every day life schedule?

I don’t know, I’m still trying to figure it out. I have a feeling I’ll be working on that “balance” for the rest of my lifetime.

Only the universe can tell. But I’d love to go on a tour and share these songs live with more earth people.

Be sure to grab a copy of the new LP, “Supanova” then take a journey through the stars and beyond.