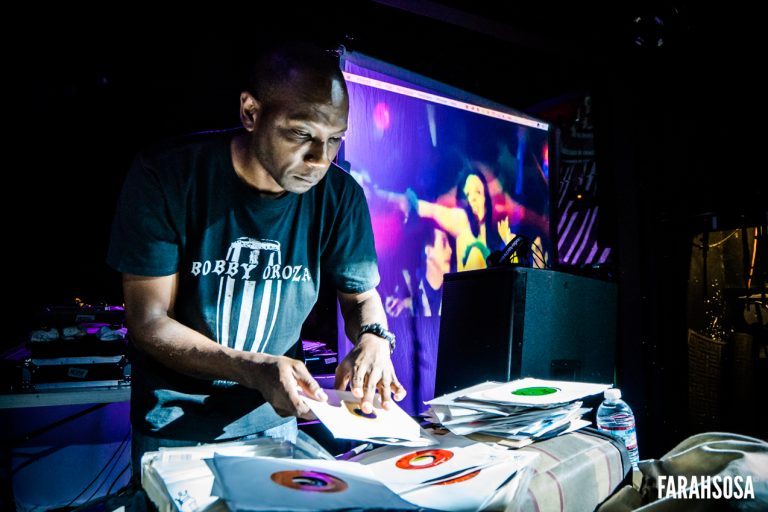 Often times there are things that you recognize and brush to the side that others notice as well and will mention to you as something of an anomaly or rather unique. Over the past say 5 or so years, race has been a big topic on many fronts but has really become a topic of discussion as of late in the DJ scene, especially when playing funk & soul is concerned. As a primary Black genre of music, 60’s and 70s funk & soul nights are mainly thrown by and DJ’d by non Black DJ’s as well as the audience in attendance which has never bothered me.  People ask me all the time, how does it feel to play for an audience that isn’t mostly African American and my answer is always the same. Music and culture is to be shared with everyone and as a DJ, I play music for anyone that enjoys it.  It’s that simple, there’s no deep thought about it, it is what it is. But the fact is, that I am one of the very few Black DJ’s on the scene playing funk & soul 45 nights (along with Flash G. Parks in Houston and DJ Clifton in L.A.) and quite possibly, the only one who travels internationally to play black music. Now when I say “Black music”, I’m speaking in the term coined by the Japanese scene which referred to DJ’s playing funk, soul, jazz and rare groove primarily on 45’s and mainly obscure and lesser known artists that weren’t on major labels but more so regional and independent labels. A scene which was championed by the likes of many influential DJ’s from Europe as well as the states who revitalized these records and played them for club filled attendees during the 90’s going into the 2000’s.

Here in the states, there are amazing nights being thrown that I’ve had the pleasure of playing or attending with one in particular being Denver’s Mile High Soul Club. A few years back there was a situation that was brought up by a disgruntled person of color who asked how come they don’t have someone Black playing their night or in the audience. Essentially they were trying to play the race card and the answer they gave was simple, “we invite anyone and everyone to our night who enjoy the music that we play”. A more recent situation happened (but not the only one) here in Philly while playing at The Trestle Inn, someone (who is Black) was enjoying the night so much but before leaving asked me, how come there aren’t any Black people here and my response was simple. “The masses of that demographic don’t want to go out and here their music, they’d rather go here rap, trap or other commercial genres”. Which honestly is fine for me because the room is still full and people are enjoying an authentic experience from a DJ of the culture who truly loves playing the music of the culture. I’m a traveling DJ who has played this music across the globe, from Japan to Finland, Korea to China, Germany to Russia and back to the states again. It’s sharing those moments with people regardless of race that has kept me working as a DJ and feeling both mentally and physically youthful without worrying about who is “stealing” someone else’s culture.

At the end of the day, the dance floor has no color and the DJ’s that I’ve had the pleasure of playing with are of varying races all who have been respectful to the culture and have carried on the culture more so than the masses of Black DJ’s who never play this music. How can anyone get mad at those carrying culture on and not be mad at those in their circle who don’t even recognize their own cultures musical contributions. I’ve not only shared music with DJ’s across the globe but have learned about so much of it that I wasn’t in the know of previously.  As I said, culture is to be shared and if there is an audience wanting to learn and enjoy it, then I see no issue with it.

Here in the states, I want to thank the following for continuing to do amazing nights for rooms full of people and playing music that would ultimately be forgotten if it wasn’t them. This isn’t a full list of nights but just a few that I’ve played over the years that keep things moving.

And the countless DJ’s across the globe that keep it funky!

*I must make a note that there are certain soul / Northern scenes that tend to be rather inclusive of “their own” with almost no DJ / audience representation of people of color as well as discrimination of woman DJ’s. I have yet to come across this in the funk & soul scene which if it did occur, I would have to speak up quick.