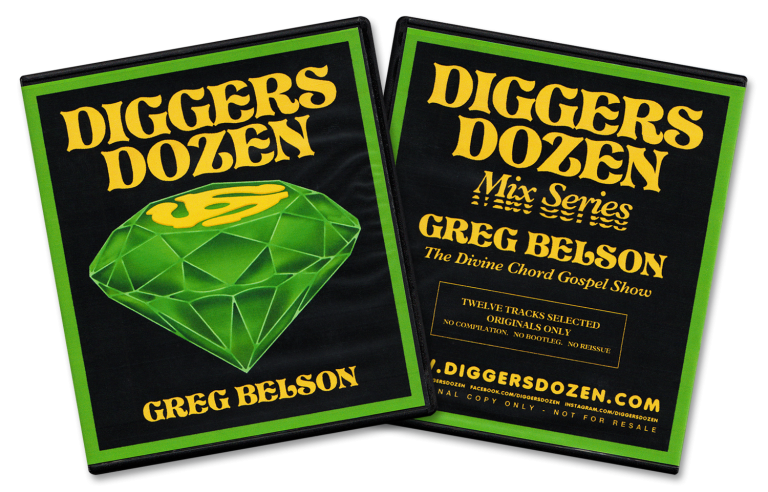 In an era where more people buy and floss records via social media for props, less people are actually putting them to good use by making mixtapes to present that music to the world. There are a few heads over the years that have continued to bless the listener with music that’s under the radar of the masses to formulate and create essential listening. One of those who put their best foot forward in keeping that end of record culture alive is without a doubt, Diggers Dozen who not only throw a monthly night showcasing some serious DJ’s and collectors but also release their mix series featuring elite diggers and their choice gems.

The latest in their CD release series finds the one and only Greg Belson behind the decks delivering a sure shot of heavy gospel selections which definitely fits this as being the lucky #7 in the series. As an LA based collector & international DJ, Belson is one of the world’s leading authorities on the funky gospel sound, hunting across America and the globe for gospel gold. Over the last few years he has compiled two superb compilations “Greg Belson’s Divine Disco” Vol.1 & 2 on Cultures of Soul exploring gospel disco, modern soul and boogiefied sounds as well as forthcoming compilation “The Time For Peace Is Now – Gospel Music About Us” on Luaka Bop released September 13th. He also hosts the highly acclaimed “Divine Chord Gospel Show” on LA’s Dublab radio, with an extensive archive of broadcasts online.

Greg Belson selects twelve sublime rare and off the radar gospel gems from the Divine Chord vaults for this supreme mix in the series.

For a preview and to purchase, head over to http://www.diggersdozen.com