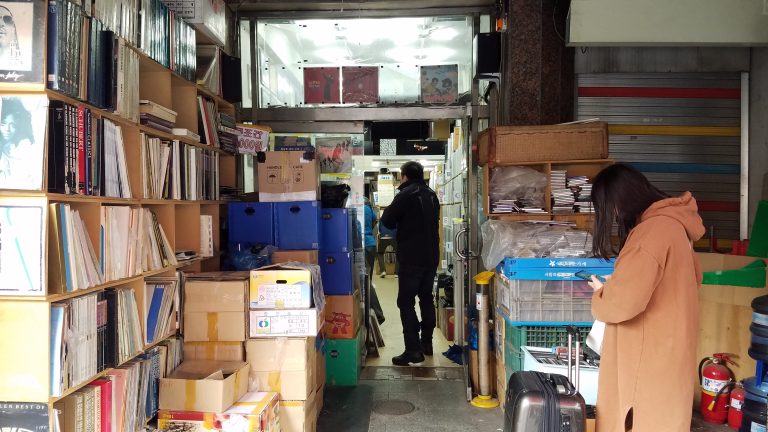 There’s something special about spending time in record shops around other music lovers and record collectors, listening to what’s playing over the speakers and engaging in conversations of not just music, but also life in general. The record shop is somewhat of a safe haven for music connoisseurs who can geek out on their music knowledge with others while comparing notes about releases, facts or false trivia about an artist or label. There are plenty of stories to be told weather it’s about an elusive vinyl pressing, backstory on a corrupt record label or any number of interesting tidbits. Out of all of the people that I’ve met in record stores, the most interesting ones seem to be the older guy’s who either own the shops or have been buying records and building collections since the beginning and before it became a trend. Those are usually the ones with the best stories, the ones who can tell you when they saw certain artists perform live in their prime or even what band member they grew up in the same neighborhood or went to school with. It’s really a unique setting and definitely a special one when you visit on the right day and time.

Last week while visiting Brewerytown Beats here in Philly to pick up a few records, there was an older Black gentleman who seemed to be a regular in the shop and who was looking for something in particular. Assuming he was in his late 60’s and definitely one who enjoyed a drink or two, he seemed to have quite the musical knowledge and definitely had a lot of stories to tell. After being introduced to him, he proceeded to ask me what I was into since I was a DJ, my response was funk, soul, jazz, disco which he responded with, “like Parliament Funkadelic funk”? No, more like raw late 60’s / 70’s funk 45 type stuff, early Kool & The Gang, Eddie Bo and other stuff of that nature. I kept it surface with him and didn’t want to get too deep with more obscure regional label artists but he seemed to know a bit of what I was mentioning. During the conversation, he mentioned how long he’d been buying on a serious level and not just a here and there thing which he said the beginning of the 1980’s was the start of being serious building a collection. He was fresh out of college in 1980 and got hired for a job at a financial firm. During the interview, the person doing the hiring told him that he would have to wear a suit and if he’d be ok with that which his response was “I don’t own a suit” so the guy gave him the address to Brooks Brothers which was a suit maker her in Philly that sold expensive suits. As he walked into the store he would see various important or famous figures inside shopping so he instantly knew that this would be out of his price range. After speaking with the sales person and being fitted, the suit that he wanted would cost $300 which of course he didn’t have. After mentioning that he was getting hired at the financial firm around the corner, the sales person gave him a hefty discount for the suit and he went on his way.

But back to the record talk…. It was extremely interesting to hear stories about him going to particular record stores here in the city where he shopped so much that he personally knew the owners, shops that were the go to for all the latest releases as well as older titles and it seemed that the circle was much smaller then. Record shops that as a kid I remember seeing on my way to the arcade or sneaker shopping, some that closed shortly there after while some remained open way into the 90’s. But the most interesting stories came from when he would go to the cut out warehouses and buy what we now consider holy grails and rarities for pennies. During his record buying years, he talked about taking his daughter with him to buy records which his daughter would always mention that “mom would be mad because you’re spending all your money on records” which he told her not to tell. Over the years, this gentlemen drank and had a stint with drugs which cause him to sell most of his collection, yet he’s still managed to hold onto a nice bit which he says that he just couldn’t part with. Records that he loved too much and meant most to him mixed with some those that he continues to buy on an occasion when it’s something that he must have.

The saying, “they just don’t make them like they used to” is one that stretches across the board. Weather it’s the old guy who owns the neighborhood business or the guy who worked in a certain industry an had an insane amount of knowledge, this gentlemen definitely fit the description of the few who are left. But as time goes on, there will be a new crop of “old guys” like myself who will tell the stories of our generation and the records we’ve dug for and the people we’ve met along the way to the kids who come after us. The record shop is definitely a special place to share moments amongst record collectors and music lovers with and a comradery that you just won’t find on social media or online digging.