Four Fake Michaels: The Secret Comic History of The King of Pop

In the wake of the Thriller phenomenon, Michael Jackson became the most famous personality in the world despite being a virtual hermit. Jackson, having grown up among some of the biggest stars of the 20th century, he learned from their successes and mistakes ultimately crafting a less is more approach to his public image. It’s almost impossible to imagine MJ as a judge making weekly appearances on The Voice or starting a Smooth Criminal Lean challenge on Tik Tok.

Jackson and his manager Frank DiLeo, learning from the disastrous handling of the previous pop titan (and Jackson’s future father-in-law) Elvis Presley’s career, were pioneers of a new, savvy and damn near militarized approach to image management and licensing. Having plugged all holes in his money dam by keeping total control of his image, Jackson amassed a major fortune in a matter of months.

So what do you do to cash in on what was easy yet well guarded money in the mid-eighties? You bootleg is what you do. Flea markets and street vendors flooded the cities and suburbs with tshirts, pin backs and posters produced overseas and outside the auspices of Jackson’s young empire. The shelves of Doubleday and B. Dalton were lined with pulp and softcover cash-in “unauthorized biographies” illustrated with stock paparazzi photos.

Even Jackson’s former label Motown tapped in with two two compilations of his solo output for the label, one with an unreleased track from the vault and another packaged with Jackson’s now signature glove, “tastefully”screen printed with the Motown logo.

Inevitably the comic book industry showed up for their cut. Jackson would eventually sign off on two premium comic books, both in 3D and both tie-in adaptations of his short films Captain EO (Eclipse Comics, 1987) and Moonwalker (Blackthorne Publishing, 1989).
However, in the years prior to those now high dollar releases, Marvel, DC and Archie comics found ways of working Jackson’s skinny, Jheri-curled visage into their pages adding four bizarre one-off characters to their canons in the process.

Teddy Lingard
Marvel Comics
Dazzler #33 Marvel; August 1984
An incredible Bill Sienkiewicz cover marrying the title character with the iconic red and black Thriller jacket betrays the listless story inside. Allison Blaire aka the disco mutant Dazzler is hired as a zombie extra for MJ clone Teddy Lingard’s “Chiller” music video. The director of the the video, Bob Bensen is believed to be jinxed when several accidents pop off around the set echoing Thriller director John Landis and the 1983 helicopter crash on his set shooting Twilight Zone: The Movie which killed actors Vic Morrow, Myca Dinh Le and Renee Shin-Yi Chen. 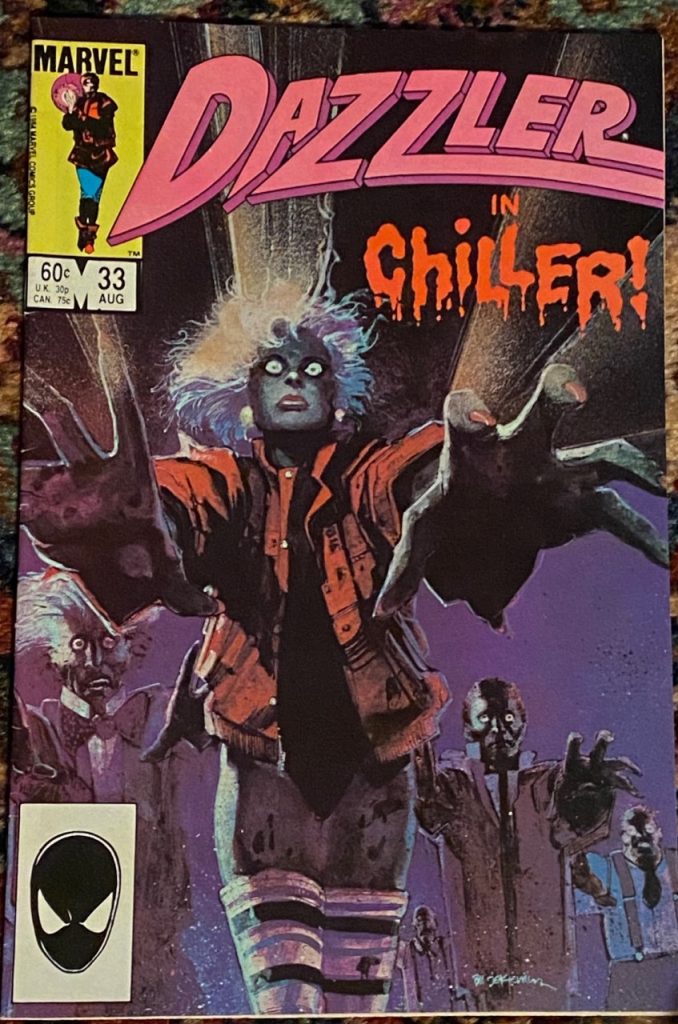 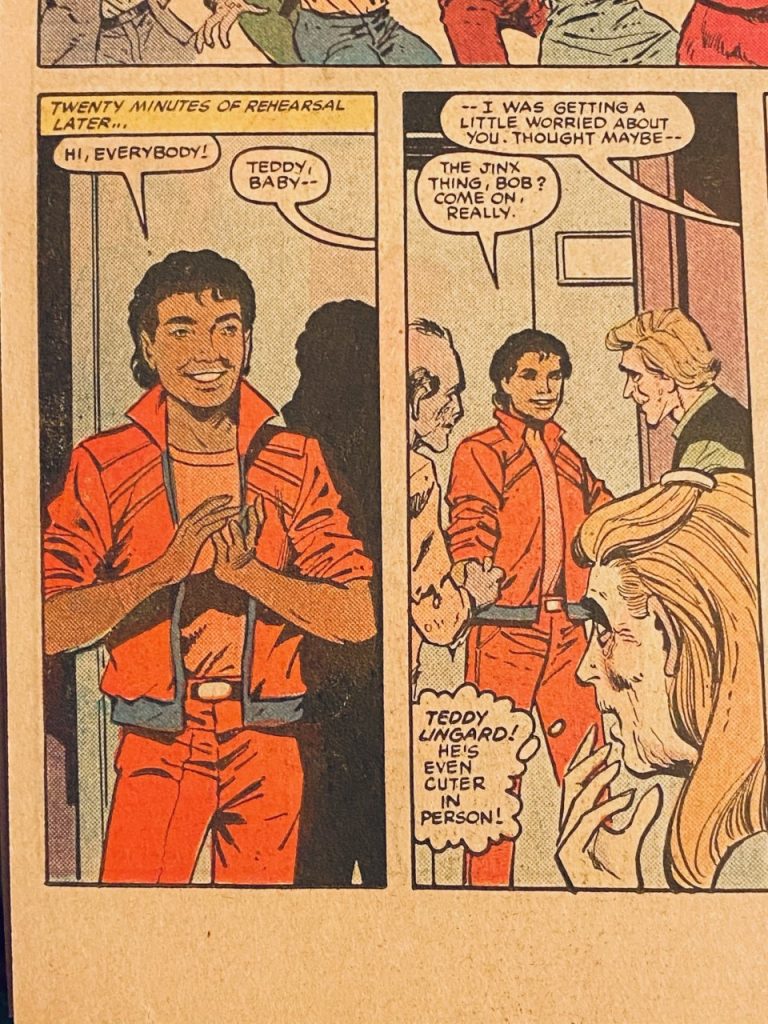 I like Teddy as a name for this character mostly because it anticipates 2018s Michael inspired Teddy Perkins from Donald Glover’s Atlanta. 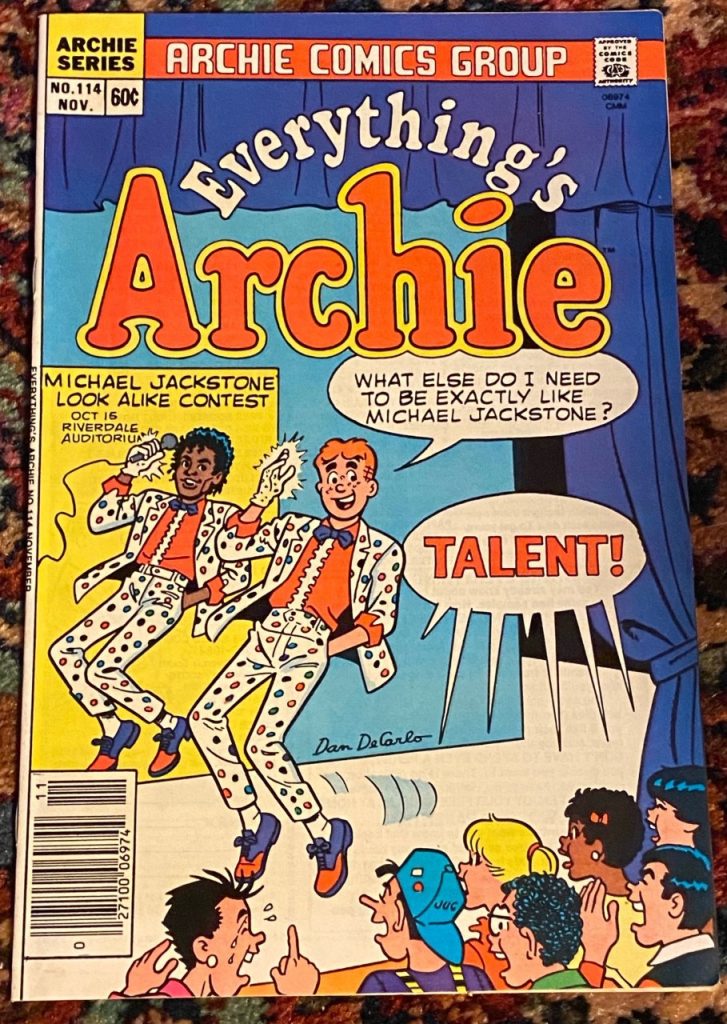 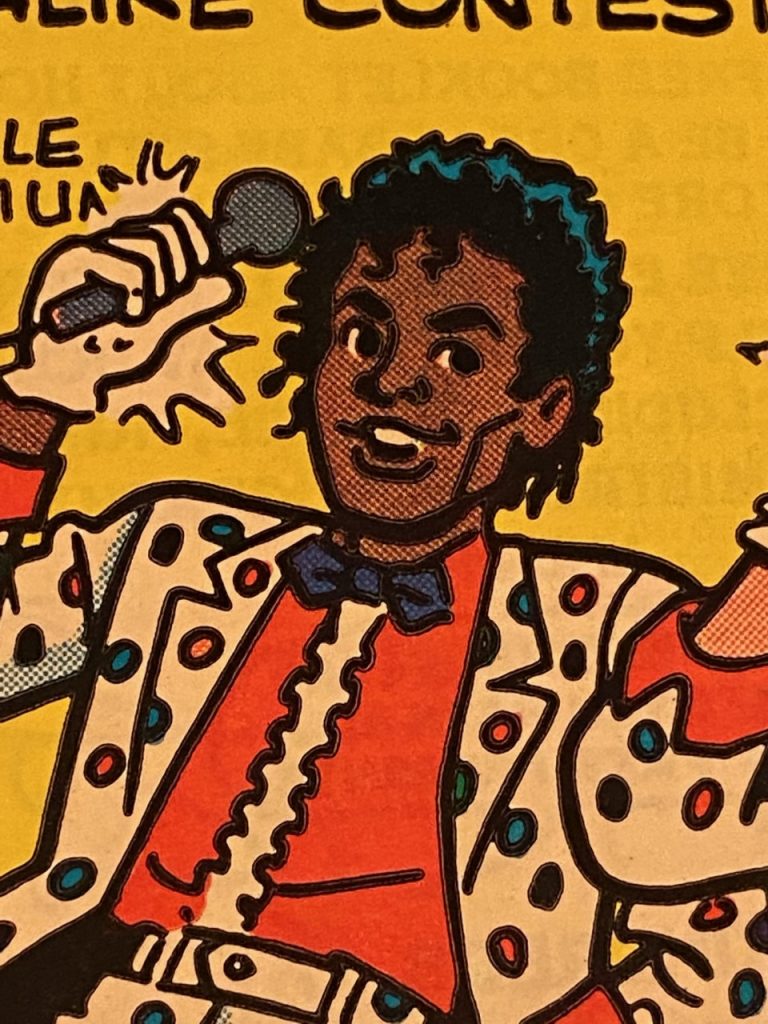 “Jackstone” is better suited for the Flintstones universe and the name was actually given to Jackson sanctioned stone-age version himself in a 1988 Just Say No Special with the Flintstone Kids (incidentally, a modern Michael appeared with Alvin and the Chipmunks in a 1994 home video).

Marlon Monroe
World’s Finest #318, DC; August 1985
The best story of this lot with the lamest cover, DC flips MJ’s real life Pepsi commercial disaster as an assassination attempt on superstar Marlon Monroe. In this version Superman uses his super breath to extinguish the flames and urban superhero Sonik, an urban avenger with a weaponized Walkman, signs up for Monroe’s security detail even suggesting Prince might be a suspect. 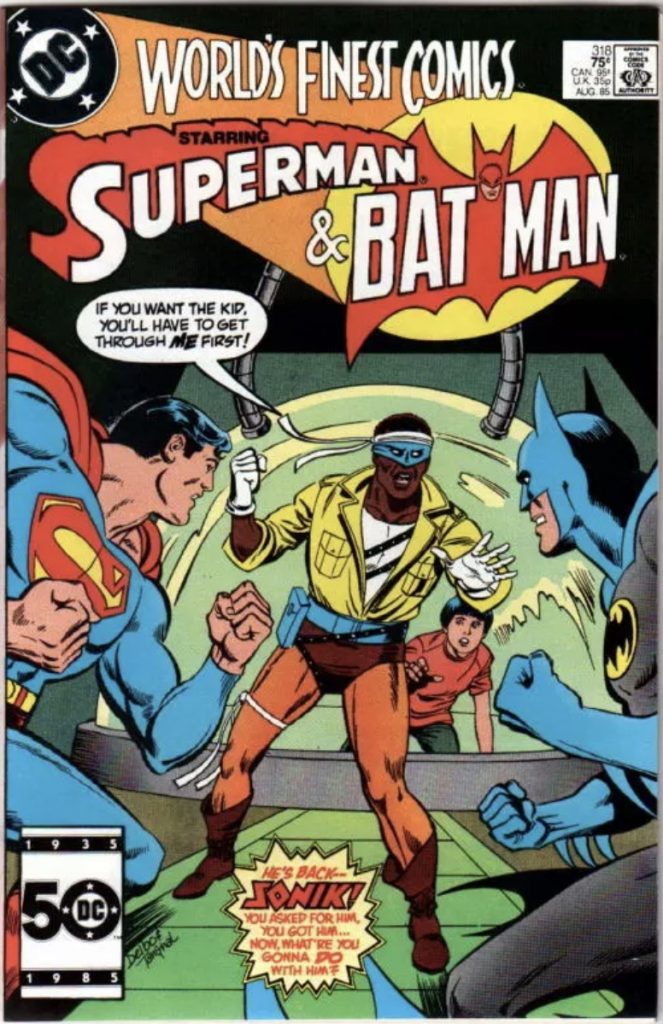 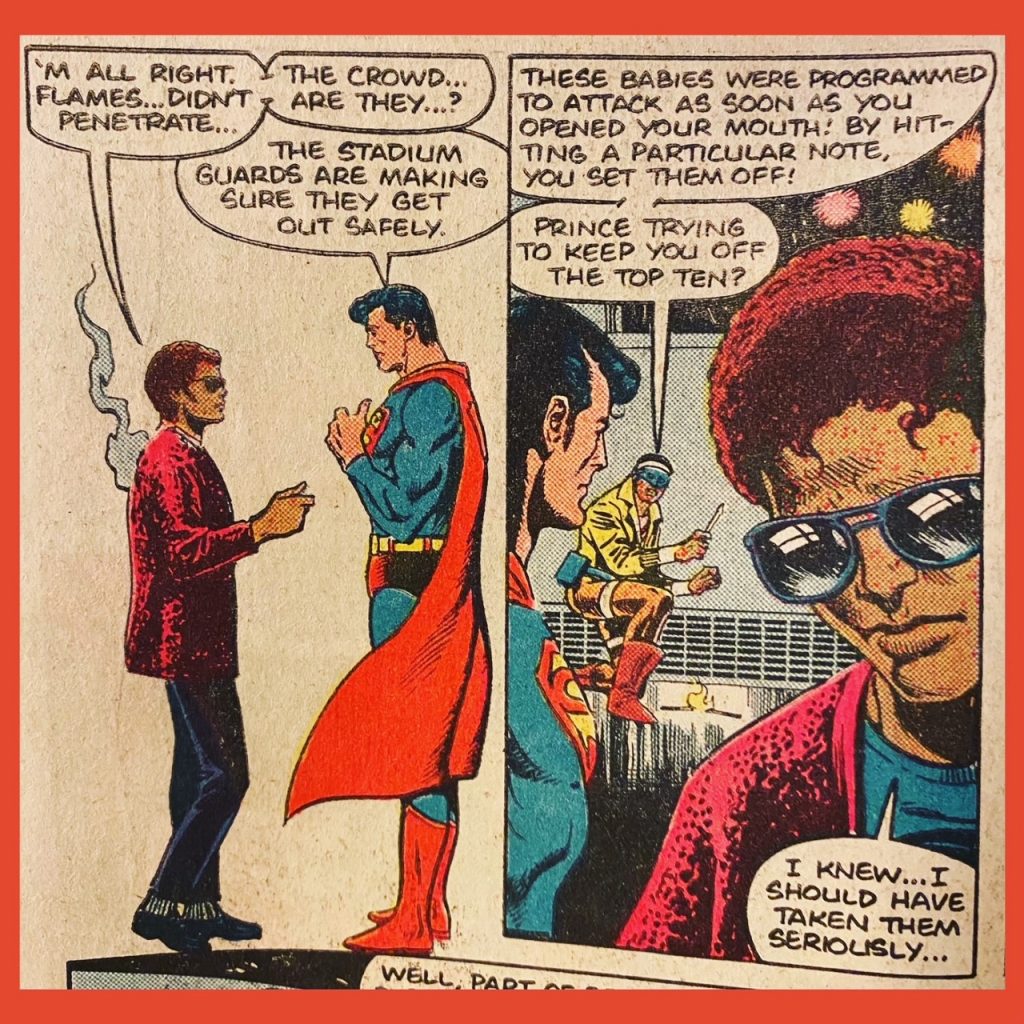 Ace Spenser
Peter Parker, The Spectacular Spider-Man Annual #5 and #6 Marvel; October 1985, October 1986
It seems that the writers spent a lot of time creating the character of Ace, a former gang leader with a mutant sense of danger, but didn’t give him a whole heck of a lot to do. A blatant mash-up of Michael (hair and aviator shades, and Prince’s Purple Rain character the Kid (leather jacket and motorcycle) Ace is at the center of a clumsy urban-read-Black gang drama on Peter Parker’s Harlem beat for the daily Bugle. Seems like his super power is he’s too cool for words easily anticipating and dodging Spider-man’s punches when they eventually square off. Barely enough action here to sustain an issue and certainly not enough to warrant the sequel “Ace II” a year later with Ace looking like a grizzled Chuck Berry. 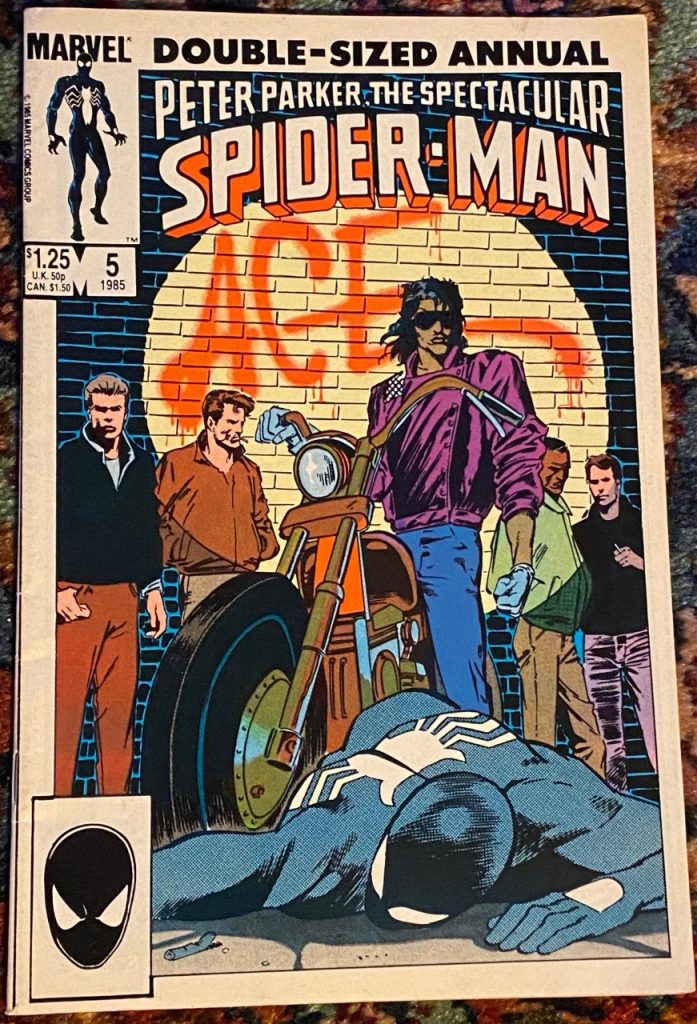 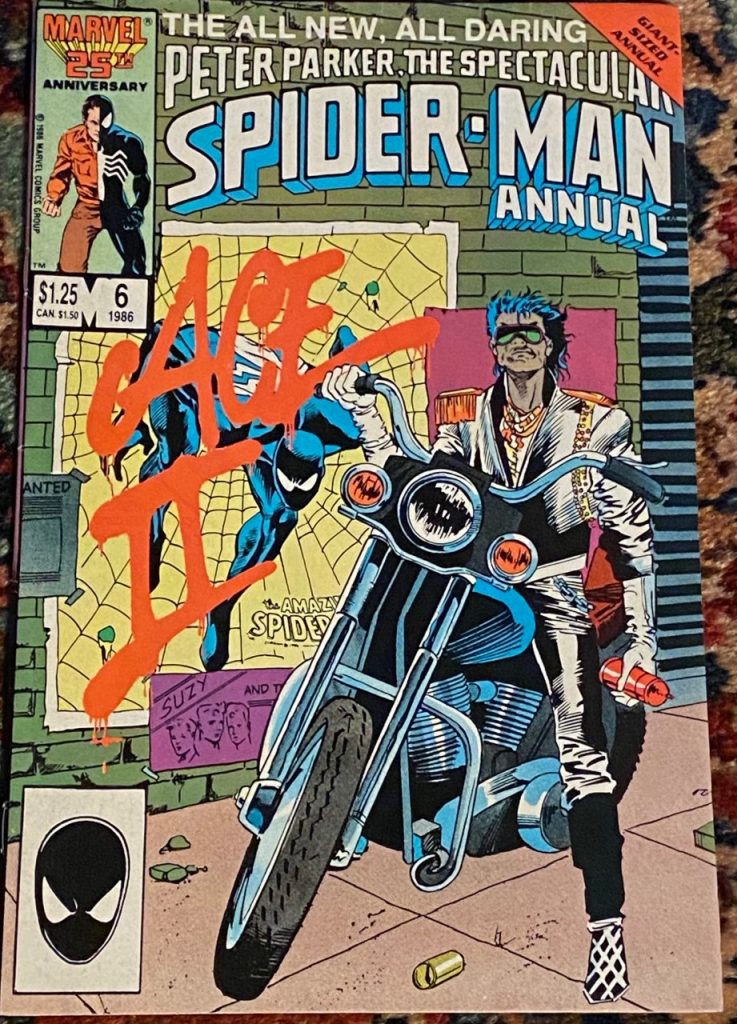 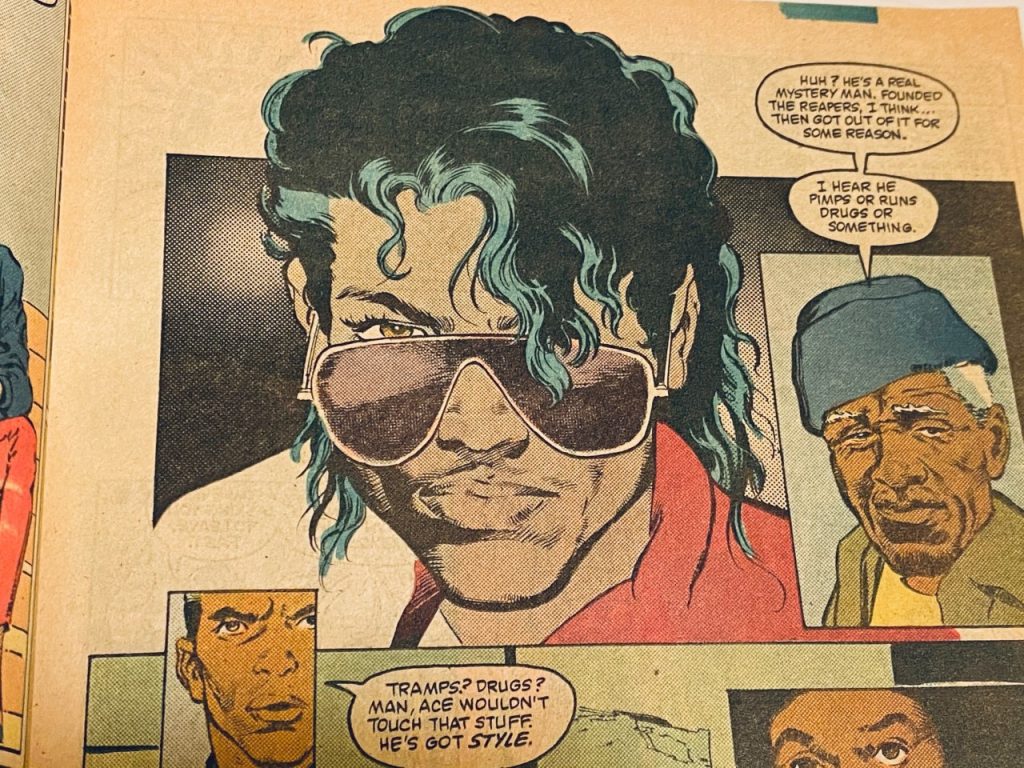 (Bonus Cover)
Archie’s TV Laugh Out #100 Archie Comics; 1985
Another clever way of putting Michael on the cover without putting him on the cover, the Archies squad-up in MJ’s 1984 American Music Awards outfit. (It’s remarkable that he could make a look iconic after only wearing it once). 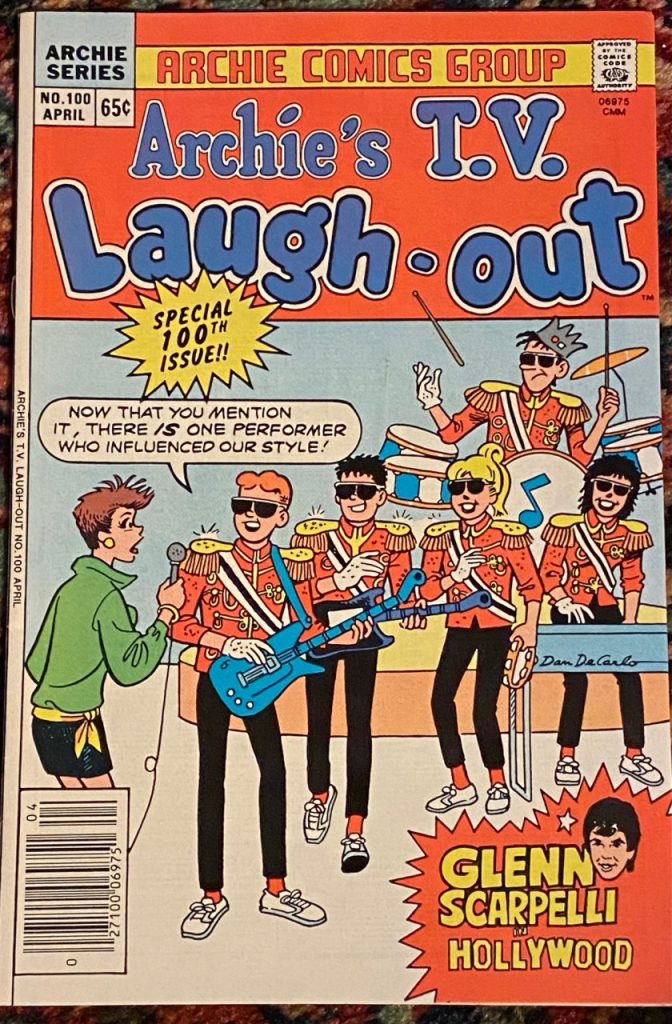