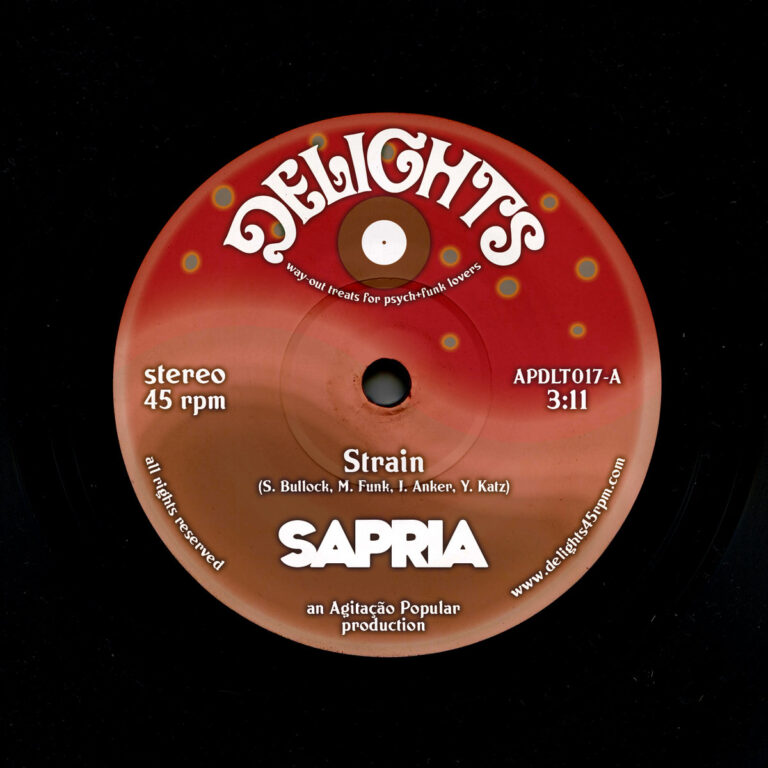 When you get the early bird word that a new release is dropping on Friday from Delights, the first thing you do is set your alarm to wake you up bright and early and factoring in the time difference just so that you can be ahead of the ball and the mad rush to what will ultimately be another sold out release from the catalog. Today’s word was no different and the label dropped a banger, which got our cinematic senses at an all time high on this Friday.

Born out of a spontaneous studio session back in late 2018, Sapria is an alloy of creative minds from Berlin and Jerusalem: Sun Ra Bullock (X.A. Cute/Edelfaul Records) and Markey Funk (Group Modular/Delights) – on keys, Itai Anker (Hynom/Andarta/Raash Records) – on bass, and Yadin Katz (The Turbans/YMKA) – on drums. Their debut 7” features the first two cuts from that session, enhanced and produced by Markey Funk two years later: the tense, accelerating, Goblin-like horror-funk banger “Strain”, paired with deep, dark, almost gothic slow-burner “Initiation” on the flipside.

We’ve come to love each and offering that Delights has brought to our ears thus far and can’t help to foolishly think that they’re releasing music strictly for us here at Nostalgia King but we know otherwise but we can wish can’t we!?  With a strong taste of classic late 70’s video nasties, the two cuts make this long-awaited new Delights treat also one of the label’s heaviest offerings to date.