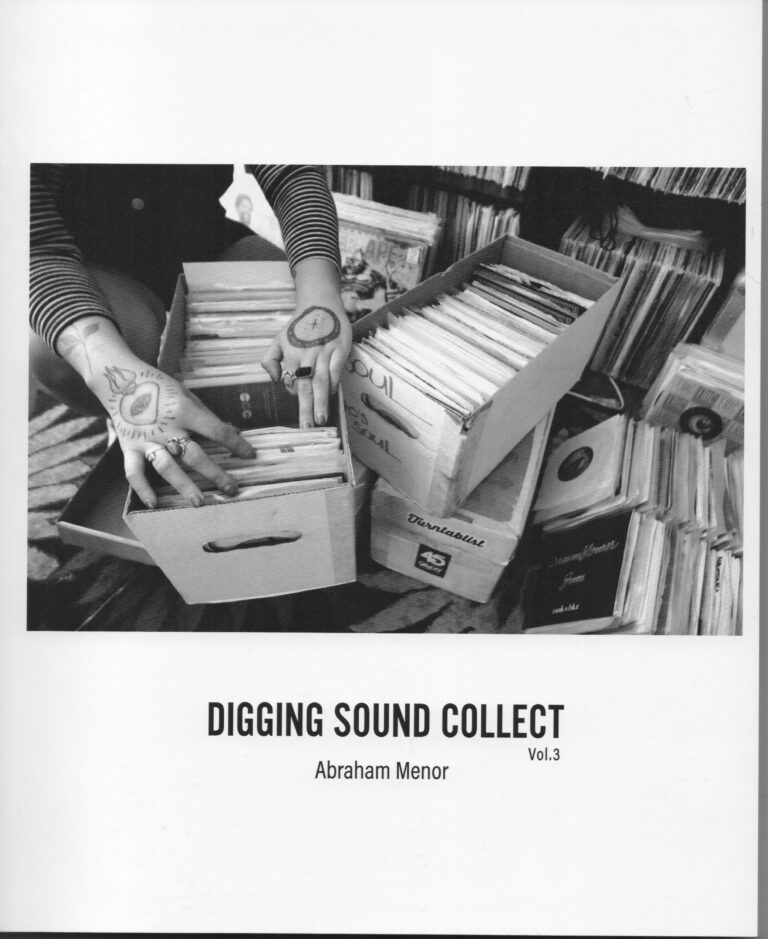 There’s something special about the DIY aesthetic and the value of being completely hands on and overseeing a project from start to finish especially when it’s something that a person is passionate about and committed to. A final product is a reflection of the person who set out to create something and when done perfectly, the crowd response should be overwhelming with excitement.  A project that fits within those very parameters is the upcoming photography book Digging Sound Collect shot and put together by Abraham Menor. The latest book is the third in the series which captures DJ’s and record collectors in their homes and musical spaces showcasing some of their favorite records. Each volume to date has featured a who’s who from East to West Coast and points in between and has been a true labor of love for Abraham and an honor for those who have been captured in history.

While in Oakland this past weekend, I had a chance to catch a sneak peak of the the book which is available for a limited pre-order with the official release being on February 11th and it’s absolutely and amazing look captured from behind the lens. I have the pleasure of being featured in the book which is an honor but it’s seeing so many collectors that you know in person, some via social media and others only by word of mouth that’s really a joy and makes this book amazing and must have. Just like previous volumes, this book will definitely sell out quick so don’t sleep!

But in the meantime, get familiar with Abe who I recently up with for a chat on how the book came together, the process and what’s next.

First, let me congratulate you on the new book and one that I’m sure will sell out like the previous two volumes and maybe even quicker with the anticipation that’s been surrounding it. I had the pleasure of flipping through the sample and it looks absolutely amazing!

How long have you been into photography and what was your first camera that you used?

I’ve been shooting since 1999, but didn’t consider myself a photographer until 2002.  My first two cameras were a Nikon N60 and a FM2.

How and when did the idea come about to start the photo book series?

The idea came from a zine that I put together of sweet soul and funk collectors back in 2016.  I received a lot of feedback and decided to take it to the next level and create something beyond a zine.  It started with a list of 15 collectors from different music genres and ended up a total of 47 people.  That was the first book.

How do you go about narrowing down and choosing people to shoot for your books?

There’s a number of factors that come into play.  Some of the people are friends I know in the vinyl collecting community, others are referred by friends or people I meet a long the way, and there are a number of folks I follow/meet on IG or the web.

It does help when it’s a referral or someone that I get to connect with in the network.  I’ve also just had some genuine collectors who might not even post or share anything on the web that I end up meeting at a swap or in a shop.

This is the third book in the series and the largest one to date. How far did you travel to shoot everyone and did you get everyone that you set out to?

The third book, is all based in the US.  Due to the pandemic traveling was limited and restricted.  The first and second book included collectors outside of the states that included Johannesburg and Vancouver.  I have shots of folks from Tijuana and Mexico City from 2022 after the third book was completed, but that might end up in another project.

The awesome thing about this project is, I get to meet and shoot folks in cities and states that I might have never visited if it wasn’t for this project.  I still have a long list of people I would like to connect with and a list from people I have shot or met along the way. 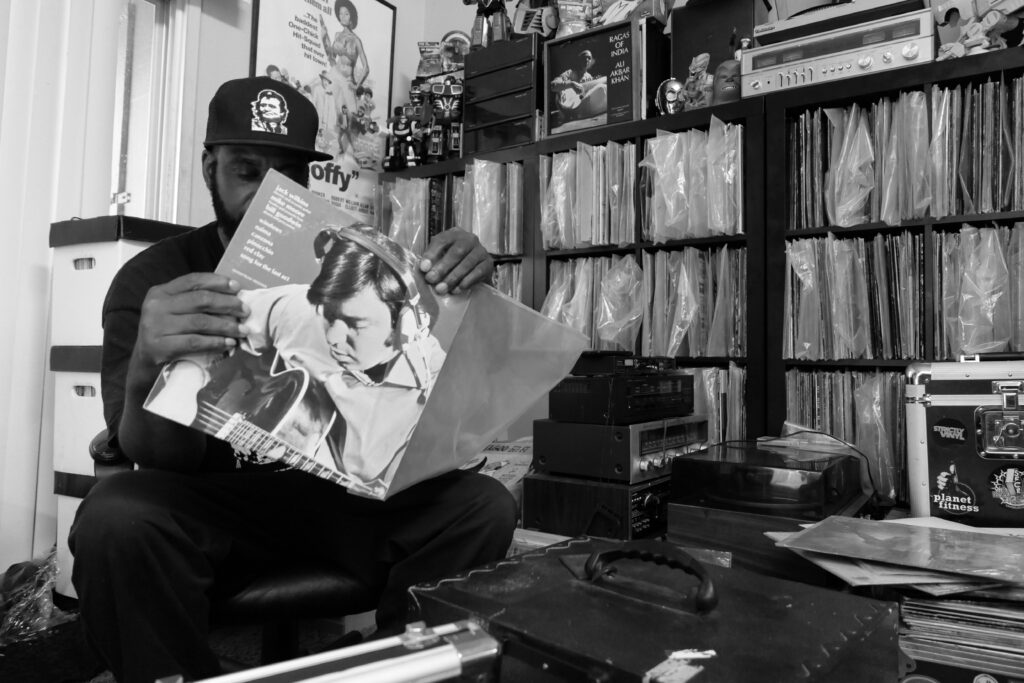 I’m sure you shot quite a few photos of each collector. What criteria did you use to sort through which photos to use for each?

As a photographer, I’m looking at composition, perspective, what looks unique, and what looks good in black and white.  With the theme in mind, I’m pulling the photos that captures the records, ephemera, or objects that the collectors talked about the most or maybe because they had to play something for me.  I also look for how a person is holding the record.  Sometimes the way one holds or displays the record gives a feel or vibe.

One of the most unique things about the book and photographs is the postcard series that you’ve done. It’s a classy touch that adds something extra to tie it all together. Where did the idea come from to do that?

I’ve always made postcards since I started shooting.  It’s like a business card or even a baseball card.  It’s a tangible gift of art that you can give to people.  I really like to personalize things that I create.  I look at it as an extra thank you, a cherry on top.

Outside of the collectors and vinyl that’s featured in your book, how does music and the art of the album covers inspire your work?

The music is the playlist of life and everything that I do I need music.  I have created amazing playlist from the music that I have listened to and learned about from collectors during this journey.

The art of the album covers and labels inspire my works because I know some artist, photographer, or designer took time to create something that hopefully lands with the people.  Art can hit a certain way and I take everything I see and I think about how will the photography and moments that I’m sharing hit like the music and album covers I’m inspired by.

I shot all three books with a digital Lumix LX100 and a LX100II.  It’s small and compact and does the job.  If I have my Nikon N80 with me, then I will shoot film as well. I still have a darkroom and develop my own prints. I’m both when it comes to analog and digital.

Where do you see this series of photographs going after the book sells out and is no longer in print? Are there any future ideas for maybe a gallery exhibition or other projects?

I would like to do a remix version and put a book out there with all of the collectors from the three books and also folks that I keep shooting as I continue to document.  I would probably include photos that were not used in the previous books.  We’ll see. Producing this collection of work independently and as a passion project is a lot.  I might have to consider taking it to the next level…anyone out there?

Thank you to all the folks who allowed me the opportunity to document their love for vinyl…keep digging.  Shout out to everyone that have supported the project thus far.  I didn’t think I would have made three books. Thank you

Digging Sound Collect is available for pre-order at https://pagesstacked.bigcartel.com