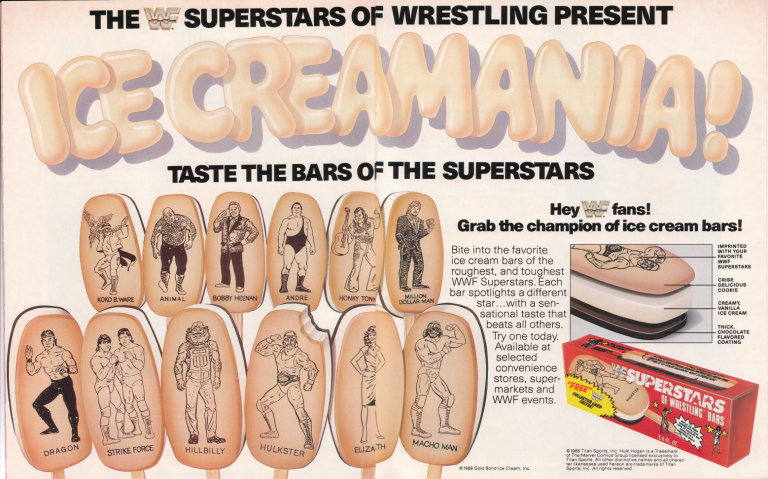 Proper branding is the most valuable way to reach a target audience and often times one that wasn’t intended and when your product is appealing to both kids and adults alike, you’ve definitely got a winner.  One of the greatest brands in the world is without a doubt the World Wrestling Federation now known as World Wrestling Entertainment who have captured the attention of audiences, young and old for as long as I can remember and then some.  They’ve always had a way with their promotions and knew exactly what was necessary to hit a market.  From their self published wrestling magazine to action figures produced by LJN of some of their most popular stars and even their line of Ice Cream Bars with your favorite wrestler etched right into it which is what we’re taking a look at today.

I remember the WWF Ice Cream Bars taking me by surprise, even though nothing owner Vince McMahon does should.  But seeing how he genius like he placed these bars at the right time during segments of the show, in commercials and if we were living in the social media world back in the early 1991, they would’ve been advertised all of your social media accounts.  But it was fun and quirky, who knew seeing your favorite wrestlers advertise ice cream bars would bring some much joy to a kids life?

Let’s take a refreshing look back at the WWE Ice Cream Bar as if it a was Saturday afternoon and we’re getting ready to hit the streets and ride our bikes with friends.