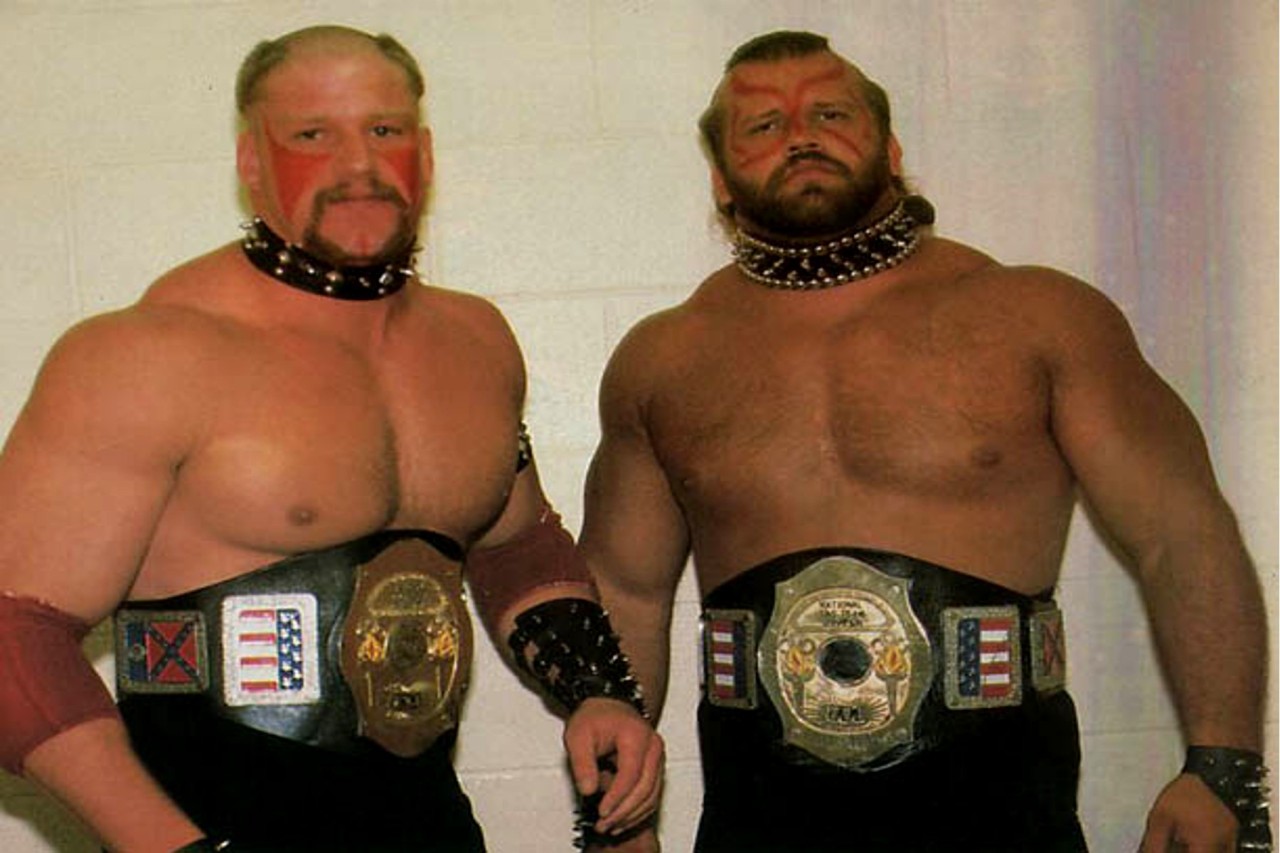 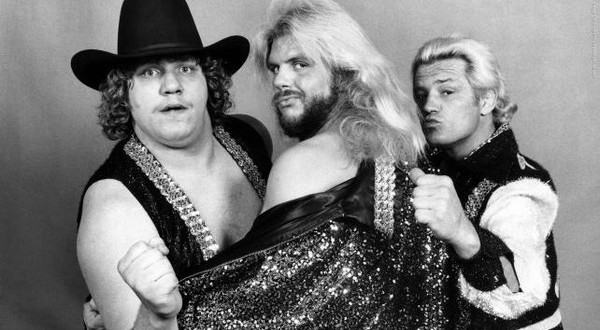 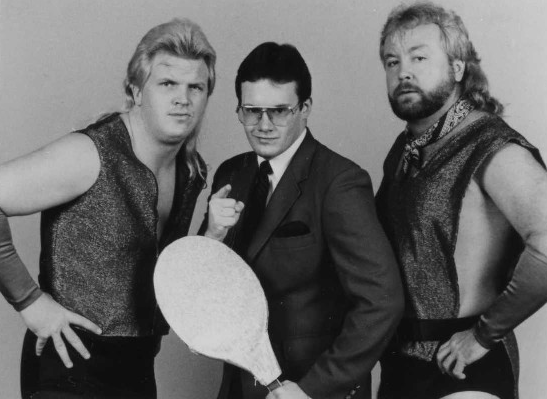 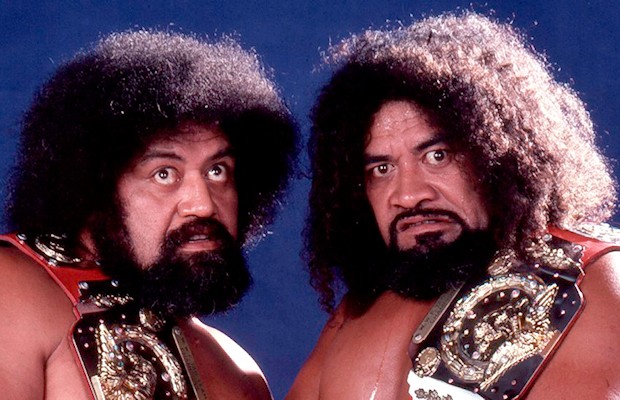 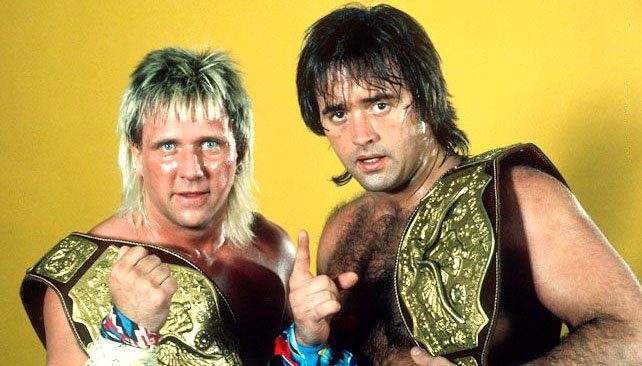 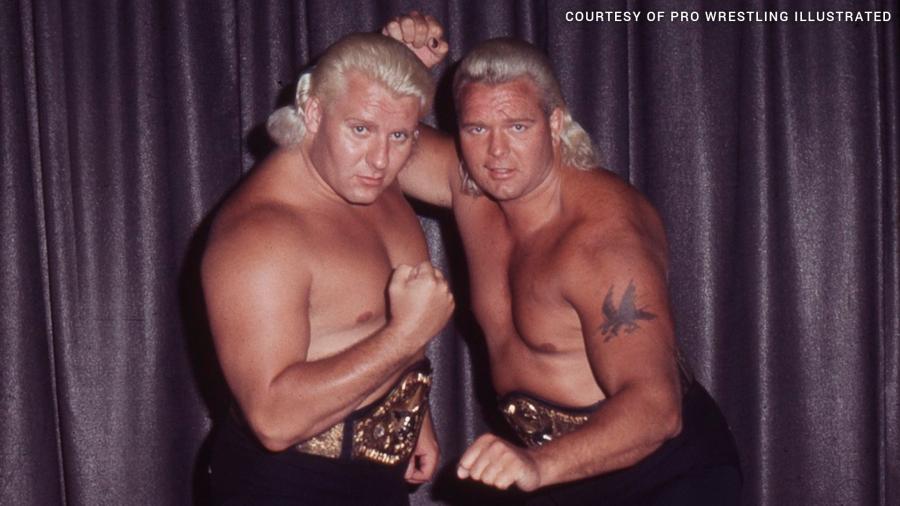 The duo made up of Road Warrior Hawk and Road Warrior Steel wrestled in various federations including the American Wrestling Association (AWA), the National Wrestling Alliance (NWA), World Championship Wrestling (WCW) and under the name Legion of Doom (LOD) in the World Wrestling Federation (WWF) (despite the altered team name, they were still individually introduced as “Road Warrior” Hawk and “Road Warrior” Animal).  Animal had briefly competed as the Road Warrior before Ole Anderson paired them up to form the Road Warriors in 1983. They were initially brought into Precious Paul Ellering’s stable as a replacement for his team of Matt Borne and Arn Anderson, after Borne was fired from the company. After a few months of rapid success, the Road Warriors dumped Ellering as manager, claiming they needed no manager. This was shortlived, as in early 1984, along with “Precious” Paul Ellering formed a stable called The Legion of Doom in the National Wrestling Alliance (NWA)’s Georgia Championship Wrestling territory.

The Fabulous Freebirds started performing together in 1979 when Mid South Wrestling promoter Bill Watts put together the duo of Michael “P.S.” Hayes and Terry “Bam Bam” Gordy. Though originally meant to be a tag team, he soon added Buddy “Jack” Roberts into the mix, and they became a “three man gang” type of tag-team—an unusual concept at the time. They invented a concept that is now called The Freebird Rule in their honor, in which any two of three members can defend the team’s championships. They usually worked as heels but also had several face runs as well. After wrestling for Watts in Mid South, they worked for Memphis based Continental Wrestling Association (CWA) where they feuded with Jerry Lawler and Bill Dundee . The group next wrestled in the Dallas-based World Class Championship Wrestling (WCCW) territory, where they had a legendary feud with the Von Erichs (David, Kevin, Kerry, Chris and Mike). This feud was ignited by an infamous incident in which Terry Gordy slammed Kerry Von Erich’s head in a steel cage door inciting a riot and igniting the legendary wrestling feud. During this feud, they started using the Confederate battle flag as a group symbol as the Von Erichs would wave the flag of Texas so they chose to use the flag of Georgia, which at the time contained the Confederate battle flag, to counter it. They also performed in the NWA-affiliated Georgia Championship Wrestling (GCW) and World Championship Wrestling (WCW), the American Wrestling Association (AWA), and the Oklahoma-based Universal Wrestling Federation (UWF). While in the AWA they feuded primarily with The Road Warriors, costing them the World Tag Team Titles in a match against long time Freebird ally Jimmy Garvin and his partner Steve Regal.

Several changes in the team lineup has happened since their creation in 1980 but in 1983 the duo consisting of Loverboy Dennis and Beautiful Bobby came into play in the Mid South Wrestling under promoter Bill Watts. The Express was first booked in a storyline with the Mid-South Tag Team champions Magnum T.A. and Mr. Wrestling II. The highlight of the angle saw Eaton and Condrey tarring and feathering Magnum TA in the middle of the ring. Condrey and Eaton won their first tag team championship when Mr. Wrestling II turned on Magnum TA and attacked him during a match, allowing The Midnight Express to walk away with the titles without much opposition. Collectively Dennis Condrrey and Bobby Eaton hold the record for the most Tag Team Titles in all of professional wrestling with 51 together; earning the right to be called the most decorated Tag Team of all time. The Midnight Express had a short stay in World Class Championship Wrestling in Texas where they feuded mainly with The Fantastics (Bobby Fulton and Tommy Rogers). When opportunities in WCCW looked to go nowhere the Midnight Express signed with Jim Crockett Promotions (JCP) in 1985, giving them national exposure through JCP’s television shows that were broadcast on SuperStation TBS.

The duo consisting of of Afa and Sika in Mid-South Wrestling, the National Wrestling Alliance (NWA) and the World Wrestling Federation (WWF). The Samoans held a total of 21 tag team championships around the world.  In the early 1980s, the Wild Samoans joined the World Wrestling Federation (WWF). They were initially billed as simply “The Samoans” before reverting to their better-known name. They made their Madison Square Garden debut on January 21, 1980 in a WWF Tag Team Championship match against Tito Santana and Ivan Putski, who retained their title. In the upcoming months, both men became contenders for Bob Backlund’s WWF Championship, but neither man won the gold. They, however, won their first championship in the WWF, the tag team championship, by defeating Santana and Putski on April 12, 1980. They reigned as champions for approximately five months, until dropping the title to Backlund and Pedro Morales in a two out of three falls match at Showdown at Shea. In late 1981, changing their name back to the Samoans they joined Mid-South Wrestling. With, “Big Cat” Ernie Ladd as their financial adviser, and manager and then changing their team name from The Samoans to The Samoan Warriors with which they won the Mid-South Tag Team Championship and feuded with Junkyard Dog and Dick Murdoch. After also attacking Ladd, the two began a feud with their former adviser. In response, Ladd when their contract was bought out by Skandor Akbar in response Ladd formed a team with “Iron” Mike Sharpe, with whom he forced the Wild Samoans to leave Mid-South.After leaving Mid-South, the duo appeared in Georgia Championship Wrestling. As part of the territory, they defeated the Fabulous Freebirds for the NWA National Tag Team Championship, which they later vacated.

The duo consisting of Robert Gibson and Ricky Morton who began teaming together in Memphis in the early 1980s, followed by Universal Wrestling Federation (known as Mid-South wrestling at the time), followed by a stint with the National Wrestling Alliance’s Jim Crockett Promotions (JCP). They held the NWA World Tag Team Championship eight times, with the first four times in JCP. They also feuded with the Four Horsemen alliance. In the late 1980s, they were contenders for the American Wrestling Association’s AWA World Tag Team Championship. By 1991, the team was losing momentum, and Morton turned heel on his partner to join The York Foundation alliance in World Championship Wrestling (WCW). In 1992, the team reformed in Smoky Mountain Wrestling, where they held the SMW Tag Team Championship ten times. The duo also worked in the World Wrestling Federation and WCW. On March 31, 2017, the duo was inducted into the WWE Hall of Fame by Jim Cornette.

Jimmy Valiant and Johnny Valiant formed a tag team in World Wrestling Association as storyline brothers. They began wrestling together as heels. They debuted as a team on 5 January 1974 when they defeated Dick the Bruiser and Bruno Sammartino to win the WWA World Tag Team Championship. The titles were held up after a match against Bruiser and Sammartino on 25 January. On 7 February, they defeated Bruiser and Sammartino in a rematch to win the titles, a second time. They became the most popular heel tag team in WWA during their second reign. Their tenure with WWA ended after they lost the tag titles to Wilbur Snyder and Pepper Gomez on 4 May. Jimmy and Johnny signed with Vincent J. McMahon’s World Wide Wrestling Federation (WWWF) in May 1974 and debuted there around that same time. Their biggest success as a tag team came when they defeated Tony Garea and Dean Ho to win the WWWF World Tag Team Championship on 8 May 1974 edition of All Star Wrestling. Valiants quickly became a dominant heel tag team as they went on to successfully defend their titles throughout the entire year. They held and defended the titles for over a year before losing them to Dominic DeNucci and Victor Rivera on 13 May 1975. This made Valiant Brothers, the longest reigning champions of their era with a reign of 370 days before the record was broken, fourteen years later by Demolition (Ax and Smash), who reigned as tag team champions for 470 days. After losing the titles, Valiants battled against the likes of Tony Garea, Dean Ho, Chief Jay Strongbow and Haystacks Calhoun. In 1976, Jimmy and Johnny left WWWF and joined National Wrestling Alliance (NWA) where they toured NWA territories. They debuted in Georgia Championship Wrestling (GCW) in the summer of 1976. On 16 July 1976, they defeated Dean Ho and Ken Mantell to win the NWA Georgia Tag Team Championship. On 10 September, they lost the titles to Porkchop Cash and Tom Jones. They joined San Francisco, California based NWA San Francisco where they defeated Royal Kangaroos (Jonathan Boyd and Norman Frederick Charles III) on 4 December 1976. They lost the titles to Pat Patterson and Pepper Gomez on 9 February 1977. Later that same year, they joined Championship Wrestling from Florida (CWF). In January 1978, they were awarded the NWA Florida United States Tag Team Championship. On 25 January 1978, they lost the titles to Florida natives Mike Graham and Steve Keirn.