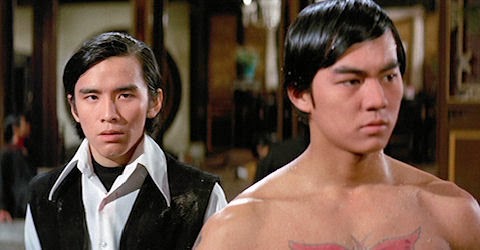 “and for my next number, I’d like to return to the classics” – Liberace

It’s Shaolin Sunday here at Nostalgia King and we’re dipping into one of my personal favorites that I’ve possibly seen more than any other flick, one that I remember loving when it would aired on Saturday afternoons on channel 17’s Black Belt Theater, one of the first that I bought on when the bootleg VHS stores started popping up around the city and of course having multiple copies on both VHS and DVD formats.  Directed by Chang Cheh and starring two of my Shaw Brothers favorites, David Chiang and Ti Lung, “Duel of The Iron Fists” 1971 (originally titled The Duel)  is an all time gem that never gets old.

Tang Ren-jie (Ti Lung) and his older brother Tang Ren-lin (Ku Feng) are triad leader Shen Tian-hung’s (Yeung Chi-hing) adopted son and henchman respectively. Shen was involved in a battle against rival triad leader Liu Shou-yi (Ho Ban) where both of them were killed. Jie then takes the initiative to be the scapegoat for the crimes of his brother Lin and Gan Wen-bin (Chuen Yuen), where then he flees to Jiangnan.

However, Gan repeatedly sent murderers to harm Jie while also seizing all of Shen’s properties and drives Lin away. With the help of Rambler Jiang Nan (David Chiang), Jie finally kills Gan, but the two of them also dies from their injuries.