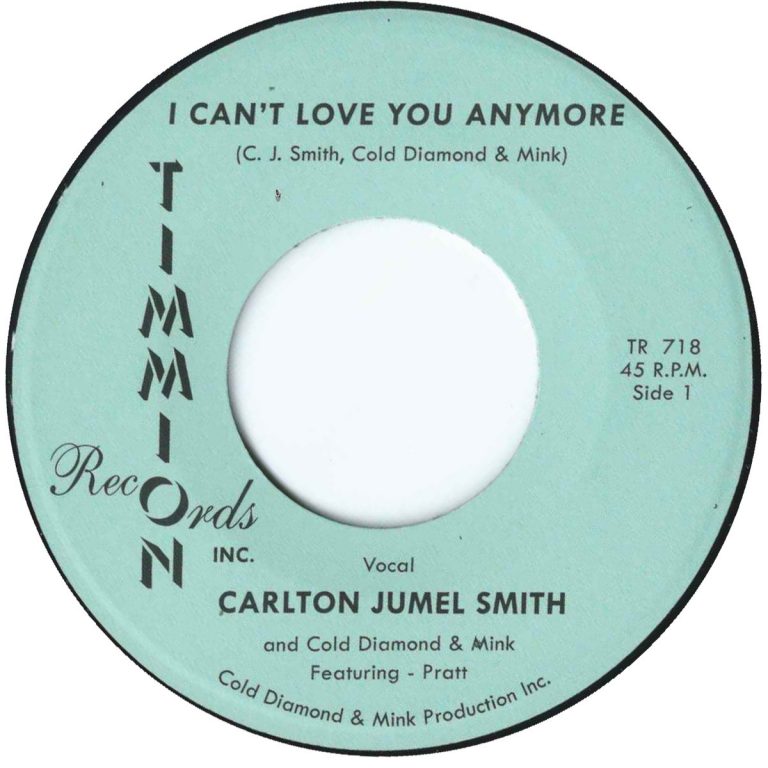 Officially out today in record bins and crates across the globe, the debut 45 from Carlton Jumel Smith on Timmion Records.  Sweet soul goodness backed by one of our favorites, Cold Diamond & Mink who keep deliver the rawness as expected.

“I Can’t Love You Anymore” is the first single by hard working soul performer Carlton Jumel Smith recorded with Cold Diamond & Mink, and the man has revealed his middle name just for the occasion. Otherwise known simply as Carlton J. Smith, there’s no doubt he has swallowed a large pill of soul since seeing James Brown live at the Apollo Theatre as an 8-year old.

Smith’s Timmion debut single sinks him into drum heavy southern flavored deep soul, a style that comes out of him naturally as water from a mountain spring. Backing him up on the falsetto parts is Pratt, who recently turned some heads with his Pratt & Moody release “Lost Lost Lost” on Stylart Records, and together the two basically NAIL IT.

When looking for artists, who just seem to move through time effortlessly with a steady air of confidence, passion and precision, one might pick up the phone and give CJS a call. Even though his discography of couple of late 2000’s albums and some guest spots in early 90’s soulful house 12″s is a bit mysterious, there seems to be not one bit of difficulty to his craft or personality. As a recording artist, “I Can’t Love You Anymore” is a new opening into raw soul territory, and it is just what the world needs today. He laid down an album worth of tracks on his last Helsinki visit, and this might be something to look forward to.