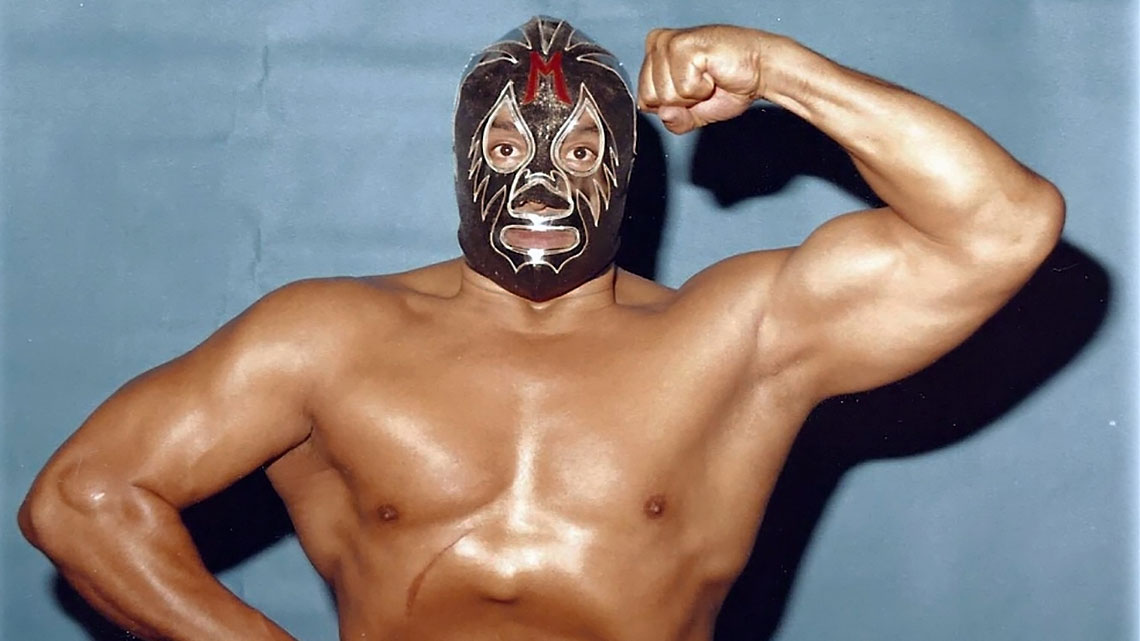 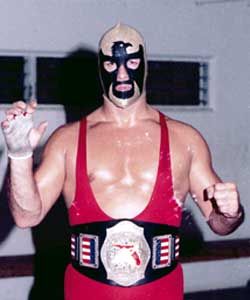 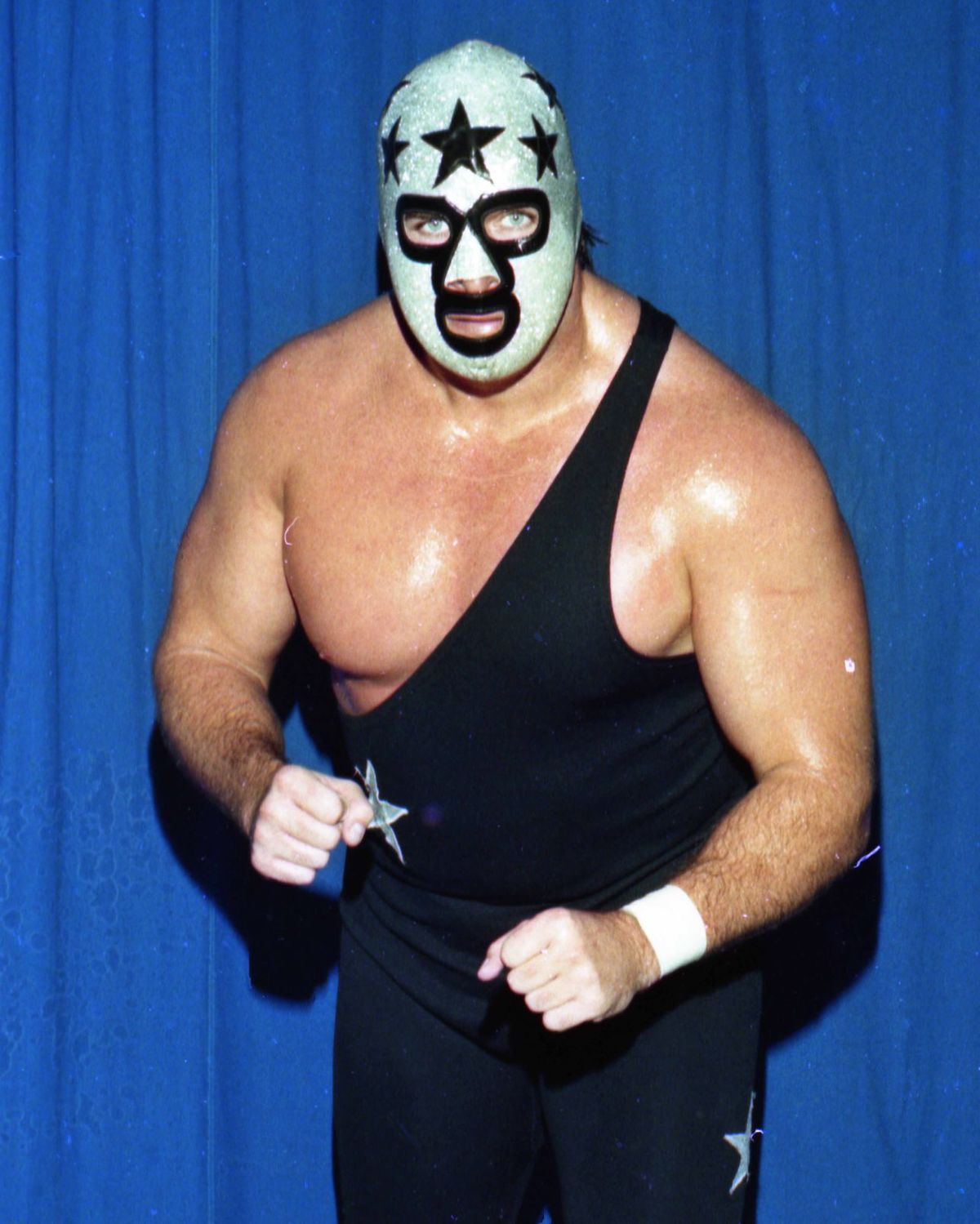 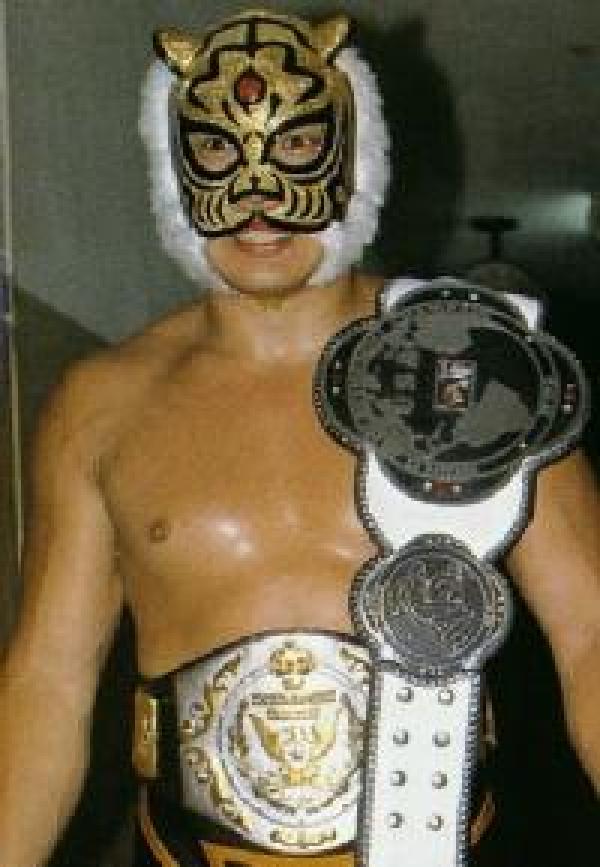 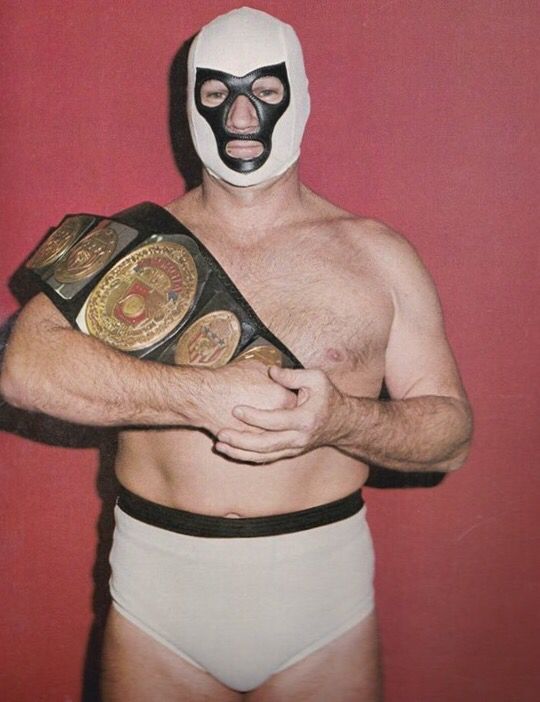 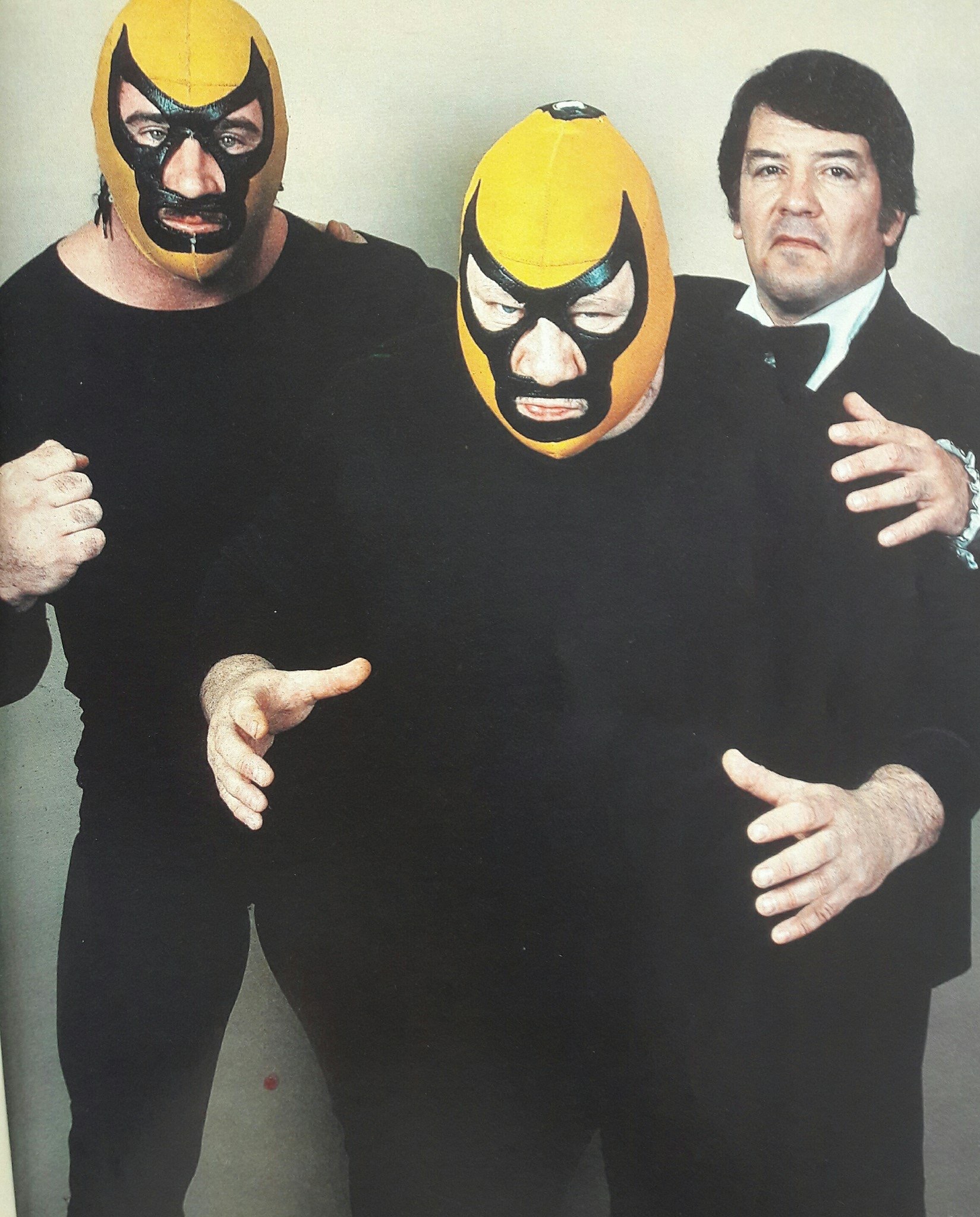 Back in the 80’s and being able to flip channels and catch various regional wrestling programs pre the corporate take of Vince McMahon and his WWE was the most memorable time in wrestling history.  Being able to catch both NWA and AWA programs in addition to the WWF with airings from World Class Championship Wrestling, World Championship Wrestling, Championship Wrestling From Florida and Mid-Atlantic Championship Wrestling meant plenty of hours of hitting record on the VCR to catch and relive your favorites in action.  During a recent conversation with my OG, DJ Groove aka Fredy Blast, we got to discussing some of our favorite wrestlers of all time and I figured what could be more nostalgic than doing his top 5 list of masked wrestlers.  After all, they were some of the most ruthless, yet not man enough to wrestle without their masks on type of heels to enter the squared circle.  So with that being said, here’s his list (not in particular order).

Máscaras is one of the original “Big Three” of the lucha libre tradition in Mexico (the other two being El Santo and Blue Demon). He is considered one of the most influential wrestlers of all time for enhancing and popularizing the lucha libre style around the world both in the ring and as the star of 20 films. Máscaras made his international wrestling debut in 1968 at the Olympic Auditorium in Los Angeles, getting involved in rivalries against the likes of Ernie Ladd, John Tolos, Black Gordman and Goliath. In 1974, Máscaras was World Champion for a short-lived but very exciting promotion, the International Wrestling Association, which promoted in the New York City area. He had major title defenses at Roosevelt Stadium, in Jersey City, NJ, against top competitors such as Ivan Koloff and Ernie Ladd. Mil Máscaras appeared in World Wrestling Federation (WWF, now called WWE). He performed at Madison Square Garden several times after a ban on masked wrestlers was lifted for him, making him the first masked wrestler in the Garden, he defeated The Spoiler (who was not permitted to wear his mask). During this time, he feuded with Superstar Billy Graham over the WWF World Heavyweight Championship.

Canadian professional wrestler best known for his masked gimmick as The Spoiler. While a major star in various wrestling promotions, Jardine saw his greatest successes in the National Wrestling Alliance affiliated territories of Championship Wrestling from Florida, Georgia Championship Wrestling and Big Time Wrestling, which would eventually become known as World Class Championship Wrestling, from the early 1960s through the mid 1980s. He also trained The Undertaker. Jardine began wrestling in the mid-1950s, making his debut in 1955 at the age of 15. He made his Maple Leaf Gardens debut in 1959 as “Babyface” Don Jardine, a protégé of Whipper Billy Watson and wrestled preliminarily in Toronto until 1961 and returned briefly in 1964. In 1964, Jardine wrestled NWA World Heavyweight Champion Lou Thesz on TV in St. Louis, but did not win the title. Jardine also wrestled as The Butcher in Los Angeles in 1964. Whilst wrestling under “The Butcher” moniker, he teamed with both Mad Dog Vachon and Dutch Savage for a short time. He challenged Gene Kiniski for the NWA World Heavyweight Championship in 1966. He became one of the top masked wrestlers in the Southern United States, particularly in Texas, where The Spoiler was created by Fritz Von Erich in 1967. He famously walked the top rope, a move he would teach to Mark Calaway (the future The Undertaker) in the mid-1980s while competing in the World Class Championship Wrestling.

In 1973 he made his debut in the Detroit territory of the Sheik (Ed Farhat). He wrestled under a mask as the tag team “Para-Medics”. He then wrestled in Pittsburgh, Detroit, WWWF, and the IWA as Bolo Mongol, the new partner of his trainer, Geeto Mongol. He soon entered the Mid-Atlantic Championship Wrestling territory under the management of Boris Malenko and donned a mask as The Masked Superstar, given the character at the advice of matchmaker George Scott. It was stated that he was an Olympic champion by various wrestling promoters. He challenged opponents with a $10,000 reward to whoever could break his “cobra clutch”, as well as utilizing the “corkscrew neckbreaker”. The Masked Superstar was 6′ 3″, weighed 300 lbs and created many mismatches due to his size, strength and quickness. He had many bouts with Mighty Igor, Paul Jones, Blackjack Mulligan, Wahoo McDaniel, Mr. Wrestling II, Stan Hansen and “Wildfire” Tommy Rich, and Dick Murdoch. He was the first wrestler (along with Blackjack Mulligan) to have one-hour cage matches, then have a series of “12” ninety-minute cage matches against Mulligan. It is believed that neither feat of hour or hour and a half cage matches has since been performed by any wrestlers. He was one of the first wrestlers to body slam André the Giant. Among other accomplishments, he won four Georgia Heavyweight titles and unified that title with the NWA National Heavyweight Championship. He also competed in the World Wrestling Federation against many top wrestlers in 1983-84. He fought against many top level opponents, including then WWF champion Bob Backlund, Hulk Hogan and Sgt. Slaughter, and Jimmy Snuka.

Obviously we’re talking about the original Tiger Mask but the character is the persona of several Japanese professional wrestlers and was inspired by the title character in Ikki Kajiwara’s and Naoki Tsuji’s manga series, Tiger Mask about a professional wrestler who was a feared heel in the United States, but became a face after returning to Japan when a young boy said that he wanted to be a villain like Tiger Mask when he grew up. As of July 18, 2010, five professional wrestlers have used the Tiger Mask persona during their careers.I n the early 1980s, the bookers in the New Japan Pro Wrestling promotion licensed the character and created a real-life Tiger Mask, originally portrayed by Satoru Sayama, to help boost their junior heavyweight division. In the United States, Tiger Mask was the first wrestler to simultaneously hold the WWF Junior Heavyweight Championship and NWA World Junior Heavyweight Championship. Sayama played the role until 1983, when he left New Japan due to his hatred for the backstage politics of professional wrestling in general. As Tiger Mask, Sayama feuded with Kuniaki Kobayashi, Canada’s Bret Hart, England’s Chris Adams, Steve Wright and legendary Dynamite Kid, Mexico’s Fishman and the original Black Tiger. In 1984, the rights to the Tiger Mask gimmick were bought by All Japan Pro Wrestling and given to Mitsuharu Misawa. Misawa also feuded with Dynamite Kid and Kuniaki Kobayashi, as well as Chavo Guerrero, Sr. and Atsushi Onita; he then moved up to the heavyweight division to feud, albeit unsuccessfully, with Jumbo Tsuruta and Genichiro Tenryu.

Woodin began his wrestling career at the age of 28 using the name “Tim Woods”. He was then given the name “Mr. Wrestling” by Nebraska promotor Joe Dusek, and subsequently adopted both a white wrestling mask and white singlet to complete the character. Mr. Wrestling became a major superstar in the Georgia, Florida, Texas and Mid-Atlantic territories. He wrestled in the World Wide Wrestling Federation in the northeast, at the upper end of the preliminary wrestlers. Starting in the Seventies, he would alternate between his masked persona as Mr. Wrestling and wrestling unmasked as Tim Woods, depending on the territory. In 1975 a plane crash that involved pilot Joseph Michael Farkas (he ended up in a coma and died the next year), Woodin, wrestling legend Johnny Valentine (broke his back and bone fragments impacted into his spinal cord, which ended his career), wrestler Bob Bruggers (broke his back and had a steel rod put in; Bruggers could have made a comeback, but he decided to retire), future legend Ric Flair (broke his back, but recovered and returned to wrestling), and Jim Crockett Promotions’ announcer David Crockett. At the hospital, Woodin gave them his real name (George Burrell Woodin), and told them that he was a promoter. Since Woodin wrestled under the name Tim Woods, a newspaper article in the Charlotte Observer listed his name as his real name, George Burrell Woodin, and mentioned that he was a promoter. Woodin was the only fan favorite wrestler on the plane, while the rest wrestled as villains, and this was back in the days when kayfabe was not broken (at the time, Woods was feuding with Flair and Valentine) and heroes and villains were not known to travel together. Eventually, rumors began circulating that Woods was in fact on the plane. Unwilling to risk the exposure of professional wrestling, he got back in the ring two weeks after the crash and was obviously in extreme pain. Flair later said in his book To Be the Man, that he was “more than just Mr. Wrestling that day, but was the man who saved wrestling.”