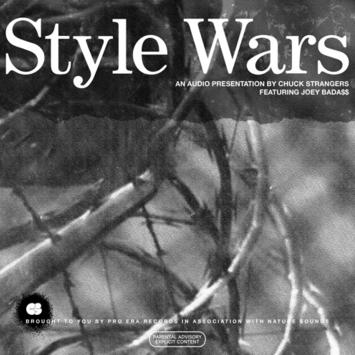 With heavy influence and paying homage to the classic NY documentary Style Wars (at least in title and occasional lyrical reference), Chuck Strangers sets up for the release of his debut LP Consumers Park with his first single from the the drop, Style Wars featuring Joey Bada$$. Hearing lines like “n*gg*s claiming they the best while Rakim still breathing” and “shouts to Oakland but the Warriors from Coney Island” shows just how influential New York culture has inspired and still respect by those that know.

“Since bursting onto the scene in 2012, Brooklyn hip-hop collective Pro Era has sent shockwaves through the culture. Crew leader Joey Bada$$ has become one of rap’s biggest stars, and artists like Kirk Knight, Nyck Caution, and CJ Fly have launched their own successful solo careers. Chuck Strangers has been a key member of Pro Era from the start, producing classic Joey Bada$$ tracks like “Daily Routine”, “FromdaTomb$” (which he was also featured on), “Summer Knights”, “My Yout”, “Escape 120”, “Rockabye Baby”, and more. A true double-threat who’s just as skilled on the mic as he is behind the boards, Chuck is poised as the next breakout star from the Era.

Now, the talented artist is announcing his highly-anticipated debut album, Consumers Park. Set for release on March 16th, the album features guest appearances from Joey Bada$$, Kirk Knight, and Issa Gold (of The Underachievers). Primarily produced by Chuck Strangers himself, Consumers Park is sonically masterful, with a heavy emphasis on raw, soulful vibes. This provides the ideal platform for Chuck to showcase his impressive rap skills, with vivid, nostalgic, witty, personal rhymes that perfectly capture the rising star’s ongoing journey from Flatbush to international hip-hop notoriety.”

Available for pre-order at https://www.naturesoundsmusic.com