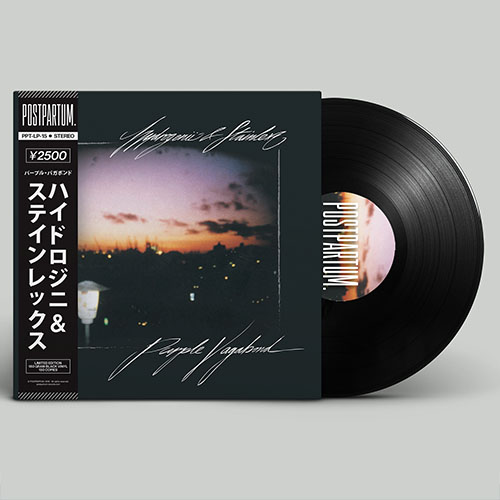 We love getting hipped to artists that we weren’t previously familiar with but going in with a set of fresh open ears often times yields something very dope and surprising in every way.  We recently got hipped to the new “Purple Vagabond” by the producer duo of Hydrogen & Stainlexz who were both individual producers but connected to create something fresh to drop the needle down.

MAKING OF:
in fact, the two producers didn’t even know each other. their only connection was the label POSTPARTUM., where the two released their solo projects (Hydrogenii – Next Heap Of Sequences” & “Stainlexz – The Real Mixtape”). However Stainlexz had heard some of Hydrogenii’s beats on soundcloud and was absolutely thrilled about his style of beats. so he asked Mario, the boss of POSTPARTUM., if he couldn’t introduce them. after the first contact, they immediately felt that the chemistry between them was just right. the idea of a joint project came right after. the collaboration was quite easy – relaxed and no stress.
the mastering engineer GABSTon connected them with saxophone player Carsten Netz. so the saxophone parts were recorded live and direct at GABSTON’s studio in Kohlberg (Germany). At the end, the record would become much more than just beats. the vision was to create real and lively music and not just the usual two minute instrumentals. the aim was to produce beats that need the whole lenght of a track to display their full potential. you should listen to the album mainly at sunset or in the middle of the night. and give it a go or two. that’s how you will fully appreciate its magic!

QUOTATION Stainlexz:
“i’ve always had the feeling that i’ve already known Hydrogenii forever without having met in real life. his arrengements just blew me away instantly. sometimes i sent him my version and thought it was good, but what he made out of it was way better. i didn’t know whether to jump for joy or cry, because his version was so much better than mine (laughing).”

QUOTATION Hydrogenii:
“Stainlexz is the type of guy who just knows how to evoke the right emotions and how to accompany them with his guitar play. when i heard his beattape “The Real Mixtape”, i was totally spellbound from beginning to end. the tape had exactly the kind of emotions and vibes that i had always wanted to create myself. when i was finished listening to it, i just knew that this was the guy i need to work with. our first track “Deep In Space” happened super fast. i sent him a raw version of the track and some hours later the first draft was born. after this track, we both knew that this couldn’t be it. we needed to produce more. Stainlexz is definitely a master of his craft, no matter whether we are talking about synths or the guitar.”