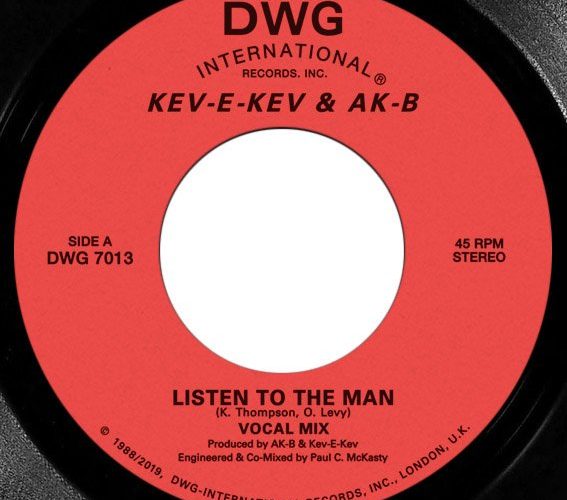 When it comes to me having small collection of rap 45’s, I much prefer pre 88 as my main focus in collecting with a handful of post 88 mixed in that I feel are worthy and timeless to my ears (which isn’t much at this point). Not necessarily a fan of pressing previous 12″ rap releases to a 7″ for the sake of format especially when so may of them haven’t withstood the test of time, there are definitely a few that are worthy of the upgrade which is the case with the upcoming Kev E Kev & AK-B “Listen To The Man” originally released in 1988 by the duo and co-produced / mixed by the one and only Paul C.

Classic 88 production technique and foundation sample courtesy of James Brown’s “Funky Drummer” transport you right back to the era of late club nights freshly dressed and radio DJ’s banging the latest rap 12″ for the Friday listeners. DWG did a great job in bringing this gem back with “Keep On Doin'” (1989) on the flip for a sure shot pair to close out the decade.