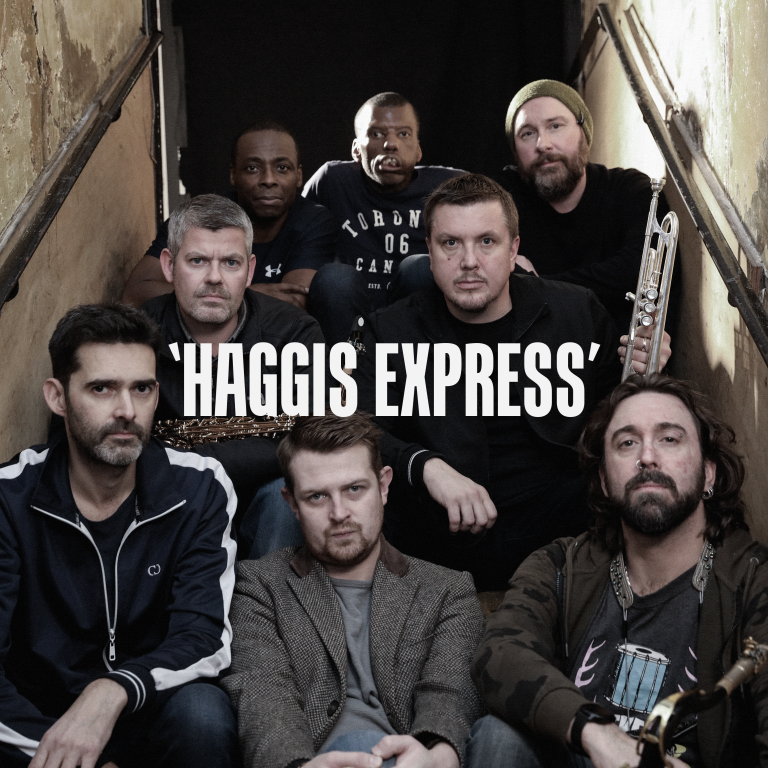 Being able to to say that you’re 5 albums in deep and still at a point where you’re turning out great music is not an easy feat for any artist, independent or major label. Most artists hit a wall after their second album without understanding how to reinvent themselves or at least stay relevant without losing their identity of who they are. But that’s not the case with The Haggis Horns hailing from the UK who have become a premier funk and soul band that continues to push on without missing a beat.  After a 3 year gap between their previous outing and their most current highly anticipated project, The Haggis Horns queue up to release their 5th studio album that will surely push them over the top and cement their status as prime real estate.

Their lead single, “Haggis Express” featured on their upcoming full length LP, “Stand Up For Love” is exactly what we’ve hoped for from the band that has pretty much had a perfect run around the track without breaking a sweat. This is pure dirty funk at it’s best, deep in-the-pocket drums and bass groove, scratchy funk guitar, a fiery hammond organ solo, latin fire congas and a horn section so sharp you could shave with their riffs. The type of cut that DJ’s would flock to, to fill up dance floors at the top of the night and features a who’s who of musicians making up the finest brass and rhythm section players in the UK who have played for recorded with a host of major music artists including Mark Ronson, Corinne Bailey Rae, Lou Donaldson, Amy Winehouse, Lily Allen, Martha Reeves, Jamiroquai, John Legend & The Roots, The Cinematic Orchestra, Morcheeba, Roots Manuva, Finley Quaye and Nightmares On Wax.

With a resume that lists quite a few notable names, it’s time for The Haggis Horns to become a household name worldwide themselves, and why shouldn’t they be just that!? The credentials are all in place and their sound is purely who they are, unfiltered and explosive like dynamite ready to shake things up in a way that’s been reserved for only the finest of bands in the modern era. Two decades strong and we’ve yet to tire of hearing their sound as some other bands have faded away into obscurity, The Haggis Horns blow on and rise up for the occasion of being the band of bands out of the UK.  2 thumbs up and a round of pints for everyone and put it on my tab, The Haggis Horns are back and that’s more than enough reason to celebrate!