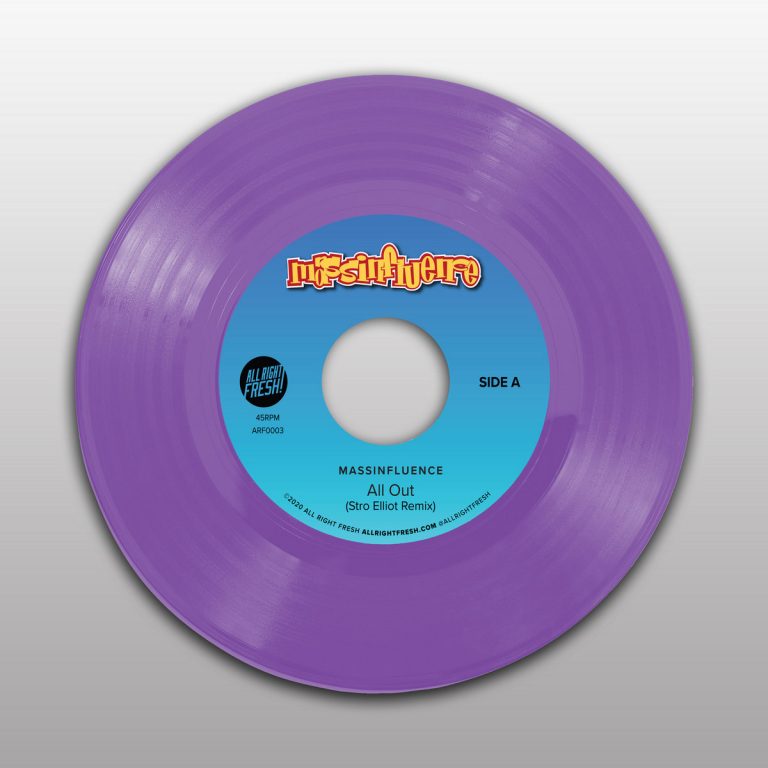 Without a doubt, one of my favorite rap 12″ spins during the 2000 era for my club sets as well as on our radio show The Formula was without a doubt, Massinfluence’s “All Out”. Everything about it was just so right and sounded proper when played just right behind a sound system. It’s 20 years later and it still sounds as refreshing as it did the day I received it from my promo guy back then which makes sense why All Right Fresh! would be giving it a proper re-release and this time on 45.

Being highly praised by MTV during it’s release, the Atlanta-based group consisting of H20, Cognito, and Auddesy who were honored and given the comparison of being the “De la Soul of the Dirty South” and it stuck. Given the special treatment for this anniversary re-release, it’s only right that it get’s expanded to a double 7″ project. The first 7” begins with the head-bobbing “Analyze” which is punctuated by the precise cuts of Company Flow’s Mr. Len. The timeless single originally released in 2000, feels current in today’s political climate. The flip side features MassInfluence’s standout b-boy classic “All Out,” which gets a fresh remix by producer Stro Elliot on the second 7”. Stro’s body rocking drums and smoothed out keys combined with the expansive rhymes of the group, lend to the already hypnotic groove.

Stro Elliot—a well-kept secret weapon and member of The Roots, carries the Atlanta MCs’ legacy into the now making this rhythmic single not just for the dance floor and b-boys, but rap aficionados everywhere. If you don’t know, now you know and this is a highly recommended drop so do yourself a favor and cop!