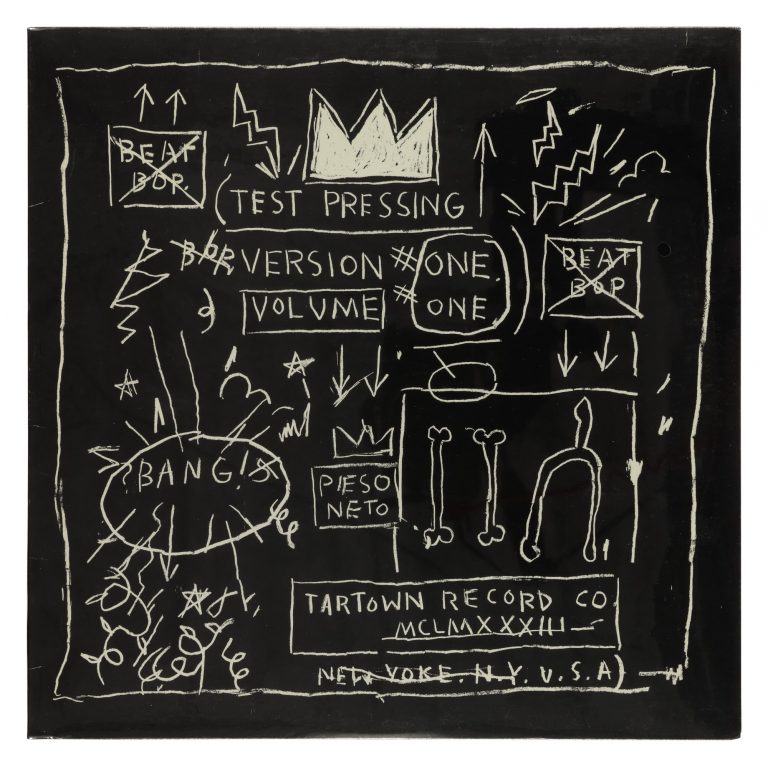 Why Your Rammellzee vs K-Rob Is Not Worth $100k

It’s crazy the type of hype that can get stirred up based on something being featured at auction that we’ve all seen or owned before, yet have never seen it sell for more than it’s worth. Yesterday the Hip Hop world went a little crazy and was thrown off of it’s axis when items for the first ever, Sotheby’s Hip Hop auction went to bid. Plenty of items fetched top dollars but it was one particular item that caught the attention of record collectors and has many believing that they are sitting on gold.

The item in mention is the sealed Rammellzee vs K-Rob “Beat Bop” 12inch with cover art by late artist, Jean-Michel Basquiat. Originally estimated to sell between $2,500 – $3,500, but in the end the record actually sold for an astonishing $126,000! Holy shit Batman! Did we read that correctly!? $126,000!? Yes, you read or heard it right. Now I know what a few of you in possession of this record are saying to yourself, “I’ve got that record” and are now you think that you’re sitting on gold right? Suddenly everyone believes that they themselves are an owner and appraiser of an antique or rare gem when the only auction they’ve ever watched in their life was eBay. Well here’s where the air gets let out of your balloon and turns your upside down frown, into a gas face.

Let’s start at the top shall we? Here is why your copy of Beat Bop is NOT worth the $100k that the Sotheby’s item was auctioned for. For starters, Sotheby’s is a prestigious establishment, eBay or Discogs is not. The average selling price on Discogs is $1,100 with the highest selling at $2,240.00 with one currently listed for sale at $5,437.86 which has been sitting there for quite sometime. The last time this record sold on Discogs was July 2018. So why did the Sotheby’s copy sell and not the Discogs copy? Well the Sotheby’s was sealed (your’s is NOT) and in the record collecting world, no one knew these to be sealed when sold. Something even the deepest of collectors of collectors never knew. Next, the Sotheby’s copy comes with a story and has lineage which your copy does NOT. This particular copy was actually touched by Basquiat and given to the consigner for this auction.

There is also another variable factor that place a part in this auction. An item like this most likely did not go to a record collector. It either went to a museum of sorts or to an art collector who buys and collects works by Basquiat and not just any works, something with a story behind it. Also, 100% or the sale of this item will be donated to the Archive of Contemporary Music. Not only are people bidding to win, but they’re also driving the price up because the proceeds are going to a great cause and not just to someones pocket. Haven’t you ever seen a charity auction where people spend  insane amounts of money for something only worth a few hundred dollars? It’s the charitable cause that is of value, not the item.

After the auction ending, chatter began immediately on social media with everyone speculating on how much their copies were worth and how they could cash in on the prize. Wake up call, that ship already sailed and your copy will never be worth that much. Sotheby’s + sealed + backstory + charitable cause = influential value. Discogs copy = whatever some record collector is willing to pony up for it.

After a few weeks have passed we’ll all have forgotten about the hype centered around this record and brought back down to reality. With only 500 copies of the original pressing done, the record is indeed rare in the sense that it’s not something that’s just sitting on the wall of your favorite local record shop. But it’s not the one known copy that’s sealed and was touched by Basquiat rare.