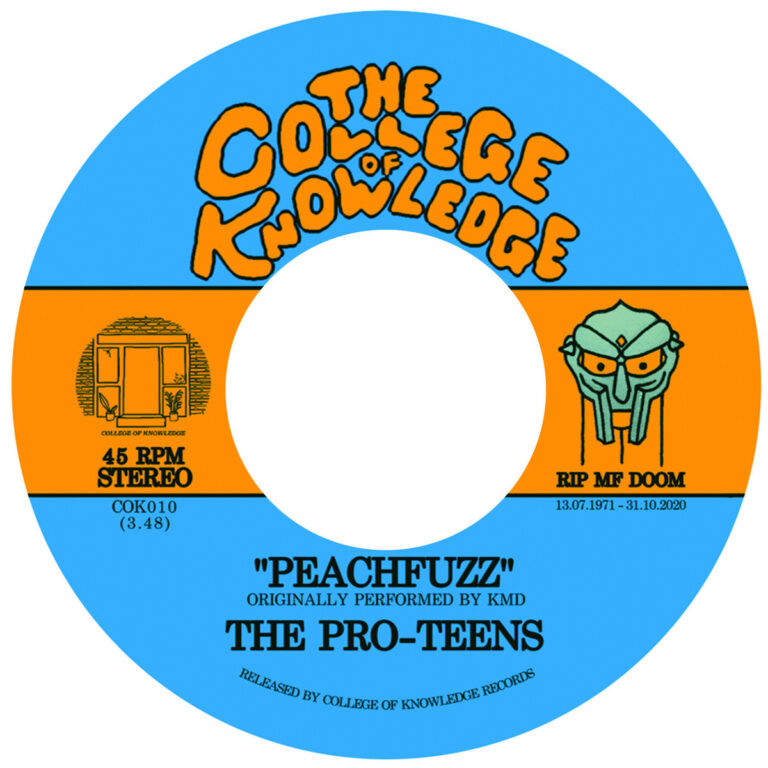 One of the most loved MC’s who left this world way too early yet continues to get recognition and the props that he deserves it none other than MF DOOM. Whether it be visual wall tributes beautifully painted by street artists or costumed mask wearing fans that celebrate during the annual DOOMSTRAVAGANZA, his character has evolved from super villain to super hero amongst those that have grown up with him.

Having previously heard producer related renditions of some of his works, we are now treated a full on 7″ by The Pro-Teens who stepped into the studio and recorded something amazing celebrating both sides of the coin of Daniel Dumile as KMD and DOOM. Whether it was a Galt McDermott break, a JJ Fad “Super” sample, or a Sade piano loop, these were the musical fibres that were woven into the professional teen’s DNA, and set the tone for who they would become.

This 7″ pays homage to two crucial cuts from DOOM’s deep catalogue: Peachfuzz, an early triumph from the days before Daniel Dumile donned the mask and called himself MF DOOM, from KMD’s first album Mr Hood, and One Beer, a standout track from the MM..FOOD album.

This double-sider is just an appetizer for the main course which comes in the way of a full length LP celebrating the man and legend titled “MF TEEN: Your Concurrence In The Above Is Assumed”. The LP pays tribute to DOOM in a very heartfelt way and is a personal letter to him for all of his musical contributions and inspirations. What we need is more DOOM in our lives and this tribute album will be something that will surely stay in heavy rotation for years to come.  But for now, enjoy the upcoming 45 and get ready!