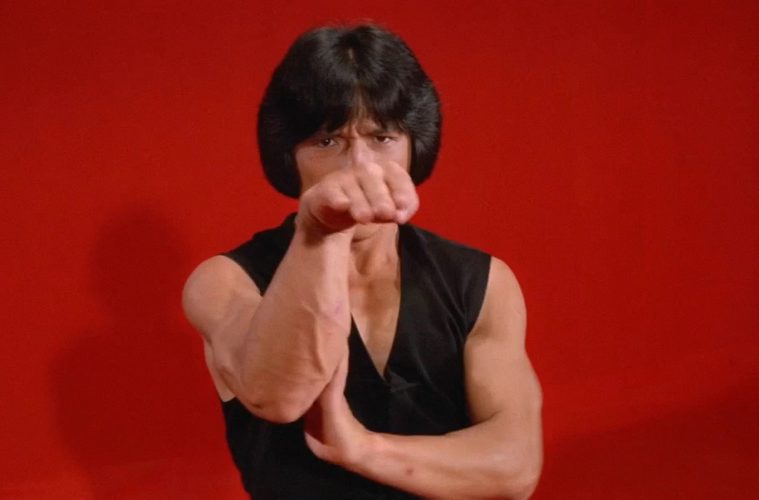 Lately I’ve been going back and revisiting a few flicks that I haven’t watched in quite a while and often times flicks that don’t necessarily get mention when I talk about my favorites. One of those flicks is Jacky Chan’s “Snake in The Eagle’s Shadow” which I remember enjoying at a younger age but then not really giving it the love as I got older but then enjoying it later on which seems to be the case with a few of his earlier films.

“Chien Fu (Jackie Chan), an orphan adopted by a kung fu school, is overworked as their janitor and abused by the kung fu teachers as a walking punching-bag, with the school’s cook, Ah-Wu (Tino Wong), being his only sympathizer. Chien befriends an old beggar (Yuen Siu Tien) by offering him a meal and a place to stay. Unknown to Chien, the old beggar is actually Pai Cheng-Tien, one of the last surviving masters of the Snake-style of kung fu. Pai is on the run from the Eagle Claw clan, which is viciously killing off all of the rival Snake-stylng spot, but is ambushed by Eagle Claw student Su Chen and an assassin masquerading as a Christian missionary (Roy Horan), and is injured. After being abused once more, Chien later finds him, helping him recover. Pai agrees to give him more lessons, on the condition that he does not call him “sifu” (“master”), since they are friends. The real reason, however, is to keep Chien’s connection with him secret from his pursuers.

Chien practices the lessons and learns to avoid being hurt by the school’s bumbling teachers. When the school is invaded by the Mantis school, to everyone’s amazement Chien easily defeats their master using the snake style. Unfortunately, one of the passing wanderers who witnesses the fight is the high master of the Eagle Clan, Sheng Kuan (Jang Lee Hwang), who recognizes the style at once and decides to tail Chien.

Chien meets Shang Kuan, who inquires about the old beggar, claiming that he was a colleague of Pai’s. As a show of ‘proof’, he easily fends off Chien’s attacks. Chien realises that his Snake-style fighting is no match for the style practiced by the stranger, and thus creates a new style from watching his pet cat kill a cobra.

Later on the Eagle Claw conspirators track down Pai, who manages to kill Su Chen. He returns to Chien for hiding, but it is then shown that Ah-Wu is also an Eagle Claw conspirator as he puts poison into their tea. Chien rushes to fetch Sheng Kuan, but sensing danger, Pai flees, with his enemy in pursuit. As Chien hurries after them, he finally learns the truth behind the conspiracy, and eventually challenges Sheng Kuan to single combat after Pai is brought down. Apparently at a disadvantage in the initial phase, Chien brings his new ‘Cat Claw’ technique – against which Sheng Kuan knows no defense – to bear, killing him. When Ah-Wu shows up after the fight and reveals his true allegiance, Chien and Pai trick and slay him, as they have by chance avoided ingesting the poison. Afterwards, the two friends wander off to refine Chien’s new technique, giving it its titular name.”