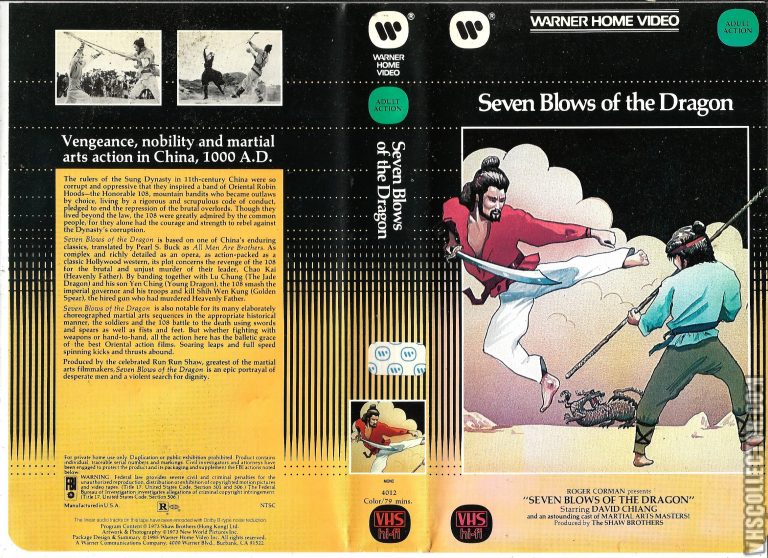 Making a return to the cinema for a little Sunday matinee as we screen the Shaw Brothers classic, Seven Blows of The Dragon starring the deadly duo, David Chiang and Ti Lung. Also known as The Water Margin and Outlaws of the Marsh, Seven Blows Of The Dragon, is a 1972 Hong Kong film adapted from the Chinese classical novel Water Margin.

The plot is based on the story of how “Jade Unicorn” Lu Junyi came to join the outlaw band at Liangshan Marsh and the outlaws’ battle with the Zeng Family Fortress.

Liangshan’s chief Chao Gai was ambushed and killed by Shi Wengong. His fellows vow to avenge him. The current de facto leaders of Liangshan, Song Jiang and Wu Yong, decide that given Shi Wengong’s skill, Lu Junyi (Shi’s former fellow student) will be the best person to assist them in taking revenge. The outlaws also note that if they succeed in recruiting Lu Junyi, they will also win over Lu’s servant, Yan Qing, who is also a formidable martial artist.

Wu Yong disguises himself as fortune teller and infiltrates the northern capital, where Lu Junyi stays, together with Li Kui, who is disguised as his idiotic assistant. They visit Lu Junyi and lie to him that a great calamity will befall him if he does not travel 1,000 miles to the southeast. Lu Junyi is skeptical of the advice and asks Yan Qing for his opinion. By then, Yan Qing has recognized Li Kui and provokes the hot-tempered Li into a fight. Li Kui is defeated and confined together with Wu Yong. Wu Yong uses reverse psychology on Lu Junyi and manages to persuade Lu to release them. Just then, Lu Junyi’s steward Li Gu, who is in a secret affair with Lu’s wife, reports the outlaws’ presence to the authorities so as to seize his master’s fortune. When soldiers arrive to capture the outlaws, Lu Junyi orders Yan Qing to escort Wu Yong and Li Kui safely out while he confronts the soldiers and is arrested. Yan Qing attempts to free Lu Junyi from prison but Lu is captured again when Yan leaves him for a short while.

Yan Qing travels to Liangshan to seek help and he attempts to rob two men for his travel expenses. The two men turn out to be actually outlaws from Liangshan, one of them being Shi Xiu. Shi Xiu goes to find Lu Junyi while his companion brings Yan Qing back to Liangshan. While in the city, Shi Xiu sees that Lu Junyi is about to be executed in the market square so he storms the area alone in an attempt to free Lu. Both Lu Junyi and Shi Xiu are eventually overwhelmed by soldiers and taken into captive.

Meanwhile, Yan Qing meets the Liangshan outlaws and they plan to infiltrate the northern capital to save Lu Junyi and Shi Xiu. They take strategic positions around the execution ground and attack the soldiers when the prisoners are about to be beheaded. This time, the outlaws overpower the guards and swiftly take control of the area. Accompanied by the outlaws, Lu Junyi marches home and kills his disloyal steward Li Gu while his adulterous wife is slain by Yan Qing.

As the outlaws leave the city, they run into Shi Wengong and his men, resulting in both sides clashing in an immense battle. Shi Wengong’s forces are routed so he challenges the outlaws to engage him and his five students in man-on-man duels. The five students fight with Lin Chong, Li Kui, Hu Sanniang, Wu Song and Shi Xiu, while Lu Junyi faces Shi Wengong. By the time the five heroes had defeated Shi Wengong’s students, Lu Junyi was still locked his duel with Shi. Yan Qing and Li Kui join in the fray and Shi Wengong is injured gravely but still remains alive. After declaring that Lu Junyi is now the new leader of Liangshan, Shi Wengong stops everyone from approaching and commits suicide. The outlaws, seeing that their quest for vengeance is now complete, ride back to their stronghold and the film ends.