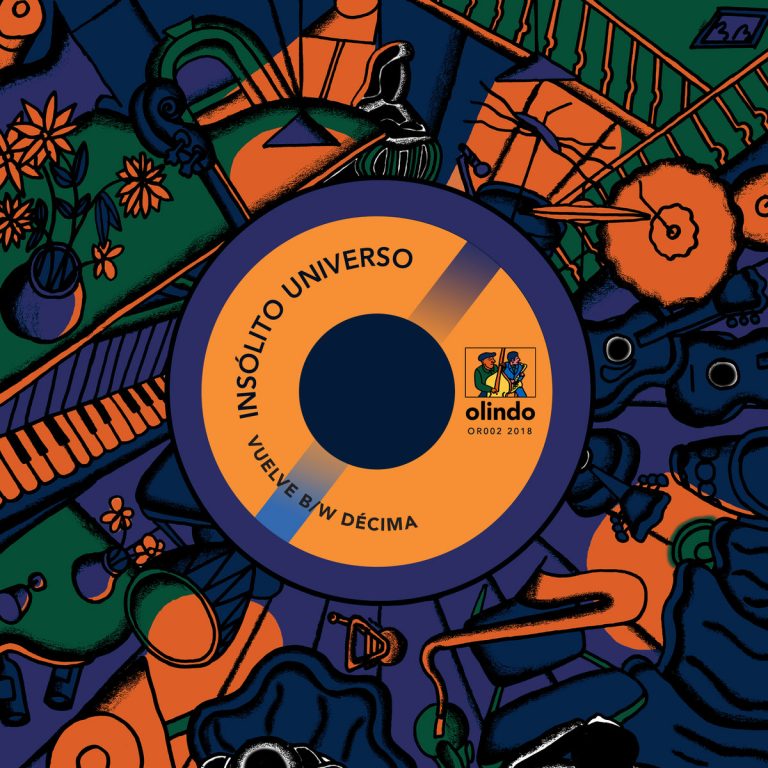 London’s Olindo Records returns with a new slab of sunshine and the 2nd release in their Venezuelan 7″ trilogy which comes from Paris based quartet Insólito UniVerso, a project that takes inspiration from a wide range of sources such as psychedelic folk, baroque singing, and traditional Latin American music, particularly through the rhythms and instruments of Venezuelan folklore. The two tracks contained here serve as a preview for their full LP to be released late summer / early autumn also on Olindo and inspired by music from Aldemaro Romero, Cecilia Todd, Un Dos Tres y Fuera, Stereolab, Ennio Morricone, and Delia Derbyshire to name a few.

Vuelve is a joropo, which is Venezuela’s most recognizable traditional genre. There are many variations within joropo, but the most widely spread one hails from the western plains. This style is usually played with harp, cuatro, and maracas. However, Vuelve is far from a traditional song as it incorporates drums, electric bass and a Farfisa organ; imagine for a second what would be if Stereolab was born in the Venezuelan “llanos”.

On the B side, Décima is a song inspired by a Venezuelan “malagueña” from the North East region. Its slow and deep rhythm is met by Edgar Bonilla and guest Rodrigo Miqueles’ cosmic synth landscapes. While the lyrics talk about how music and song allow us to transcend reality and break the space-time continuum when the world inflicts too much pressure on us.

When it comes to this genre and sound, my crates are pretty limited in that department but that’s what makes labels like Olindo Records special is that it opens our pallets and ear buds to something new that further fuels out love and passion for music and this is a great place to start.