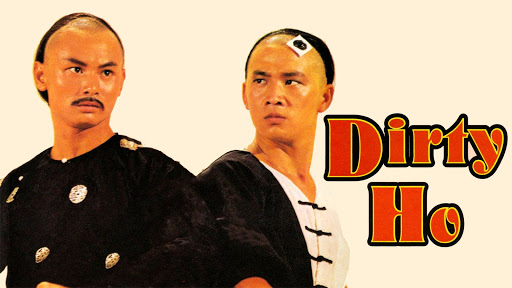 Closing out this Shaolin Sunday and revisiting a Shaw Brothers classic that doesn’t get mentioned nearly enough and totally understandable why. Dirty Ho (1979) starring Gordon Liu (as 11th Prince Mr. Wang) and Wong Yue (as Dirty Ho) wasn’t one of my favorites growing up and didn’t have the promo centered around it with multiple screenings and constant replays on Saturday afternoon TV as some of the other well known flicks. But as I got older and revisited the film in the later part of the 90’s it grew on me and became a fun watch.

Master Wang is actually the 11th prince of Manchuria in disguise. Posing as a sophisticated jewellery dealer and connoisseur of fine art and wine, the prince is trying to determine which of the other 14 heirs to the throne is trying to assassinate him. A jewel thief, Dirty Ho (Wong Yue) runs afoul of the prince, who uses Wong Yue to help him flush out his enemies. Wang is a martial arts expert, but in order to conceal his identity he systematically hides his skills, even as he deploys them.