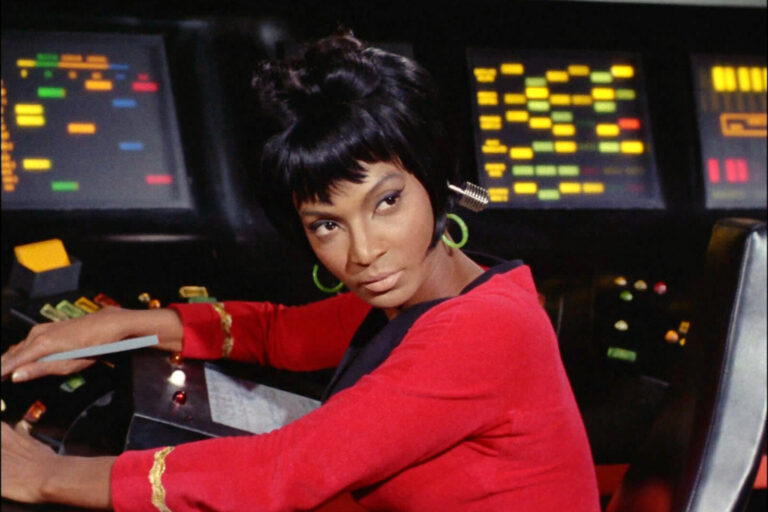 The world lost a beautiful queen and goddess today with the passing of legendary actress Nichelle Nichols, most notably known as Lt. Uhura on the TV series Star Trek. Born December 28, 1932, Nichols’ portrayal of Uhura was ground-breaking for African American actresses on television. From 1977 until 2015, Nichols volunteered her time to promote NASA’s programs, and to recruit diverse astronauts, including women and ethnic minorities.

In January 1967, Nichols also was featured on the cover of Ebony magazine, and had two feature articles in the publication in five years. Nichols toured the United States, Canada, and Europe as a singer with the Duke Ellington and Lionel Hampton bands. On the West Coast, she appeared in The Roar of The Greasepant and For My People and she garnered high praise for her performance in the James Baldwin play Blues For Mister Charlie. Prior to being cast as Lieutenant Uhura in Star Trek, Nichols was a guest actress on television producer Gene Roddenberry’s first series The Lieutenant (1964) in an episode, “To Set It Right”, which dealt with racial prejudice. What’s extremely special about her role in Star Trek is that she was set to leave the show and Dr. Martin Luther King told her that she couldn’t and that she was an important person in a position that mattered. It was then that she decided to stay on has has been featured on both franchise TV series and feature films.

One of my favorite roles that she’s played is of course Dorienda, a foul-mouthed madam in Truck Turner (1974) starring opposite of Isaac Hayes which is her only appearance in a Blaxploitation film.