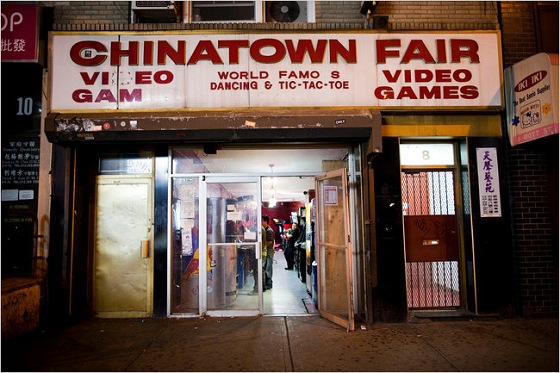 They say nothing stays the same and everything changes, sometimes for the better, often times for the worse but it all messes with our sense of nostalgia.  Last year IGN debuted the trailer for one of New York’s most iconic establishments, Chinatown Fair Arcade which was a meeting point and very much like one big party for many city youth of all backgrounds that would connect there for hours of gaming and laughs.  First opening in 1944 as a penny arcade and museum but turned into a modern arcade as we know know them in the 1970’s. Chinatown Fair was known as the cities last remaining arcade establishment with a lot of history behind it but closed it’s doors in 2011.  Not thinking much of C.F. from a historical point, I’ve visited the arcade a handful of times over the years with the last time being in 2008 when the new Street Fighter IV machines came in. The closing marked a sad day for gamers and an end of an era like most things in New York that no longer exist.

Chinatown Fair closed it’s doors in February 2011 but reopened in 2012 under the name Chinatown Family Fun Center and ran under new management and instead of attracting the previous clientele, the new Family Fan Center focused on the casual gamer which didn’t sit well with those who made it the legendary place that it became.  The documentary goes in-depth on the history of the arcade, with those who were regulars and how it was a daily part of their lives.  “The Lost Arcade” makes it’s debut via iTunes on June 1st, 2017 so if you’re a fan of the classic gaming era especially during the time when fighting games were what ruled, then you’ll definitely want to check this documentary when it aires.