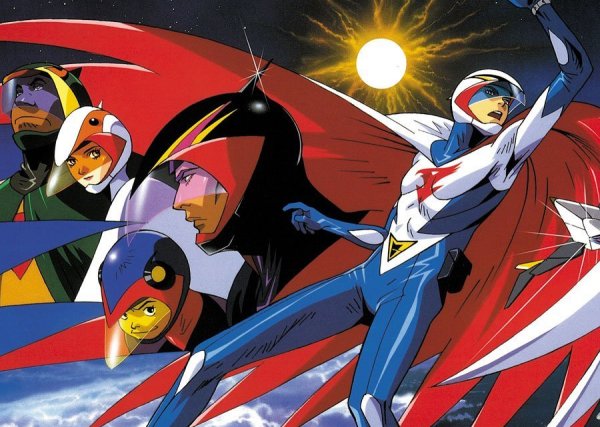 Time really flies when you’re loving and living the nostalgic life while staying in touch with your youthful side.  Today marks the 45th Anniversary to one of our favorite anime series Gatchaman (1972), known here in the states as Battle of The Planets (1978) and later airing on the Sci-Fi Channel then Cartoon Network as G-Force (1986).

Science Ninja Team Gatchaman aired for 39 episodes with recurring themes of Gatchaman involve conservation, environmentalism and the responsible use of technology for progress. The series centers around five young superhero ninja employed by Kōzaburō Nambu of the fictitious International Science Organization to oppose an international terrorist organization of technologically advanced villains (Galactor) who are trying to control Earth’s natural resources. The leader of Galactor is an androgynous, masked antagonist named Berg Kattse, who is later revealed to be a shape-shifting, mutant hermaphrodite acting on the orders of an alien superior (Sosai X).[5] The most-common plot involves the Gatchaman team opposing giant monsters dispatched by Galactor to steal (or control) natural resources such as water, oil, sugar and uranium. These mechas are often animal-based.  The Science Ninja Team is often aided by a squadron of combat pilots led by the enigmatic Red Impulse, who is later revealed as Ken’s father.

Most of the team are in their late teens, except for Jinpei (who is about ten or eleven years old). They include Ken Washio, the team leader and tactical expert; Jō Asakura, his second-in-command marksman and weapons expert; Jun, the team’s electronics and demolitions expert; Jinpei, the youngest and the reconnaissance expert, an adopted brother of Jun, and Ryū Nakanishi, the ship’s pilot. The main characters wear teen clothing with T-shirts numbered to show their rank in the team or caped, birdlike battle uniforms.

The Gatchaman team employ a unique style of violent, effective martial arts (developed by Dr. Nambu) drawing on their ability to perform feats similar to their avian namesakes, such as high-speed running and flight, high jumping and silent attacks. This fighting system, known as Science Ninja Technique (科学忍法 Kagaku Ninpō), is mentioned in the Japanese lyrics of the Gatchaman theme. The team members also use signature weapons and mecha-style vehicles, each with a mundane, disguised form. To change modes, each member is equipped with a wrist device that, in addition to communications and tracking, enables a change when the proper gesture and voice command (“Bird, go!”) is given.

Their vehicles are docked in the team’s main vehicle: the God Phoenix, a supersonic plane capable of underwater travel and space flight. The God Phoenix is armed with Bird Missiles, which are fired from a rack mounted atop the center section. After the original God Phoenix is destroyed by an octopus mecha, an improved version carries a pair of Super Bird Missiles in twin drop-down pods on the bottom center section. The ship also has an energy-beam weapon which opens the nose doors for the weapon apparatus mounted on the frame holding Joe’s car; however, its solar power source is unreliable because of its sensitivity to cloud cover. The plane can also temporarily transform into a massive bird of flame (like the legendary phoenix) to escape danger or attack, although the process endangers the team because of extreme pressure in the passenger cabin.

Battle of The Planets Intro